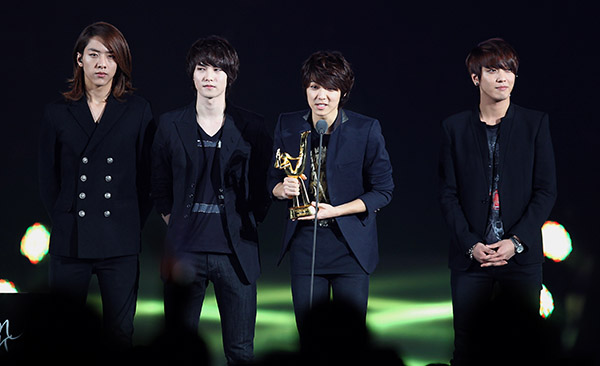 
CN Blue will release a new album to mark a new year.
The band announced at its concerts, which took place on Dec. 15 and 16 at Olympic Park, eastern Seoul, that the album will be available from Jan. 14.

The group said that the entire album was composed by band members.
The album will be the group’s first since releasing “Ear Fun” back in March of this year.
Fans were ecstatic to hear the news as the band has remained under the radar as a group lately, with individual members trying their luck at acting.

The three-hour show was comprised of some 24 songs and a number of entertainers were spotted in the audience.
On the Dec. 15 show actors like Lee Bo-young and Park Jung-ah from the KBS drama “My Daughter Seoyoung,” which stars CN Blue’s Lee Jung-shin, were present, as well as members of Girls’ Generation.
On the following day, the group AOA and singer Juniel were present.