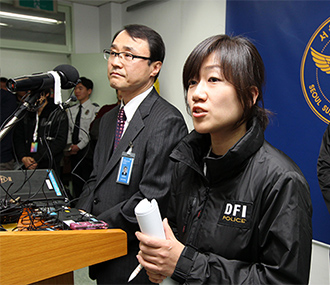 A cybercrime investigator answers questions from reporters yesterday during a press conference at the Suseo Police Precinct in Seoul. By Kim Do-hoon

Main presidential candidates Park Geun-hye and Moon Jae-in exchanged barbs on the eve of the presidential election over the police’s preliminary conclusion to clear a spy agency worker of an alleged smear campaign against Moon.

Accusing a 28-year-old female employee of the National Intelligence Service of posting comments on the Internet critical of Moon, the largest opposition Democratic United Party last week pressed charges against the woman for violating election law.

The Seoul Suseo Police Precinct looked into the case and announced its preliminary conclusion Sunday night that it found no evidence to substantiate the charges.

Dozens of DUP officials camped out in the hallway outside the NIS worker’s apartment in Yeoksam-dong, southern Seoul, for two days starting Dec. 11. 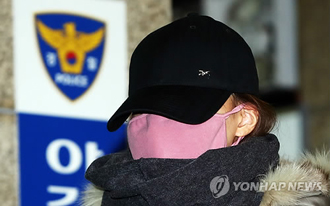 The woman contacted the police on Thursday and handed over her desktop computer and laptop.

She also filed charges against the DUP for dissemination of private information, trespassing and involuntary confinement.

After investigating her computers, the Suseo Police issued a press release Sunday and said no trace was found that the NIS worker had posted slanderous remarks against Moon or in support of the ruling Saenuri Party’s Park.

The police said 10 cybercrime experts checked into her computers’ hard disks, but no evidence was found to substantiate the DUP’s charges.

After the police announced its conclusion, the Saenuri Party and Park condemned the DUP and Moon.

“The poor NIS worker is innocent,” Park said yesterday during her stumping in Cheonan, South Chungcheong. “But the DUP is not issuing an apology. They remain silent about their human rights violations.”

“The DUP earlier claimed that 70 NIS workers are engaged in a systemic political maneuver,” Park said. “They practically invaded her home, accompanied with media, but the police could not find a single trace of an Internet posting from the surrendered computers.”

Park also criticized the DUP for casting doubts about the police conclusion.

“They demanded a quick outcome of the investigation, but now they say they cannot trust the police,” Park said. “Who do they trust, then?”

“The Moon campaign tried to shake up the election by victimizing an innocent woman and the national agency,” said Representative Shim Jae-chul, a senior member of the Saenuri Party. “But now the attempt failed miserably. It was revealed that their claim was a groundless lie.”

He also said Moon must apologize before the public for his campaign’s dirty plot.

While Park and her campaign stepped up their attacks, Moon and the DUP showed skepticism of the police probe.

“The democracy of this country is facing a critical crisis,” Moon said yesterday. “Over the past five years, they put democracy at risk. Now they are trying to use the NIS, prosecution and media to extend their rule through illegal means.”

The DUP said the police investigated the case extremely poorly with a political motive.

Park Kwang-on, a DUP spokesman, said the police didn’t bother to restore the deleted data from her computers and track down the IP addresses that she used before announcing the investigation outcome.

He also questioned the timing of the announcement.

“The police made the announcement abruptly late at night because it wanted to divert the people’s attention to the TV debate,” Park said. “The police clearly revealed their intention to intervene in the election.”

The police issued a press release on the preliminary probe at 11 p.m. Sunday, one hour after the two-hour TV debate between Park and Moon ended.

The police said they had to announce the outcome despite the sensitive timing because some media companies refused to accept their embargo request.

“We know that the DUP will criticize us for the timing,” a police official said. “But we are confident about the investigation outcome.”

A group of DUP lawmakers yesterday visited the National Police Agency to protest what they see as the political intervention of the police.

Kim Jeong-seok, deputy commissioner of the police, told them yesterday that the police didn’t want to hold onto any findings overnight because the ruling and opposition parties were paying a lot of attention to the matter.

The Suseo Police held a press briefing yesterday to further explain the probe. The police said investigators looked into the activity of both of her computers from Oct. 1 to Dec. 13 and found no trace of Internet activity related to the presidential election.

The police, however, said they still need further investigation.

She has 40 online IDs and nicknames, but the police didn’t have warrants to ask portal sites to surrender her login histories using those IDs.

She also refused to surrender her mobile phone and portable USB drive.

The police said they could not apply for warrants to force the portal sites to submit relevant data and confiscate her mobile phone because they didn’t have sufficient grounds.

“What we announced was just the analysis outcome of her computers,” a police official said. “We will continue the probe.”

While Moon and the DUP challenged the police’s political neutrality, some Moon supporters showed concerns about the situation.

“If the DUP has evidence, it must produce it,” Chin Jung-kwon, a Dongyang University liberal arts professor and a member of the Moon campaign’s political reform alliance, wrote on Twitter.