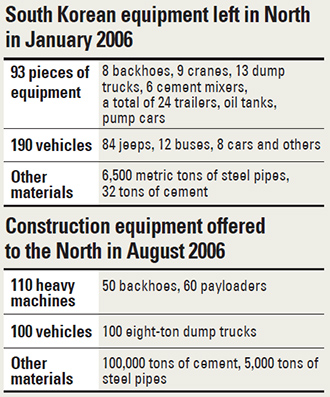 North Korea used construction equipment and materials from South Korea to aid with the latest launch of the ballistic rocket Unha-3, a Southern government official told the JoongAng Ilbo.

“The U.S. and South Korean intelligence authorities spotted the North using cranes, forklifts and dump trucks when they were constructing the new rocket launch station in Tongchang-ri,” the official said.

“We confirmed that the equipment was offered to the North for the purposes of flood recovery or building light water reactors in the area around Sinpo.”

The newly-built launch site in Tongchang-ri, northwest of the country, was completed in 2009 with modern, high-end equipment, sources say. 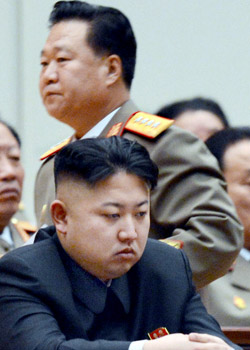 “Through various sources such as satellite images, we confirmed that the North used the equipment and building materials that the South Korean workers used to build a light water reactor at a construction site in Sinpo, South Hamgyong,” the official added.

As a business partner of the Korean Peninsula Energy Development Organization (KEDO), South Korea’s state-run Korea Electric Power Corporation began construction of a light water reactor in the North from 2001, which was part of the 1994 U.S.-North Korea Agreed Framework.

However, in January 2006, the KEDO members reached a decision to suspend construction due to North Korea’s constant efforts to develop their nuclear program.

All of the South Korean workers returned home but left their building materials, including 93 pieces of equipment, 190 vehicles, 6,500 metric tons (7,165 tons) of steel pipes and 32 tons of cement, which were estimated to be worth about 45.5 billion won ($42 million).

They left their equipment and supplies because North Korea prevented the Southern workers from bringing them back home at the time.

The KEDO tried to seal up the materials, covering them with tarps so that the regime couldn’t use them for other purposes.

At the time, the Roh Moo-hyun administration announced that “the North promised to take care of the equipment” and “we believe the North will keep the promise.”

The Roh administration even sent an additional 50 backhoes, 60 payloaders, and 100 dump trucks in August 2006 to the North for flood recovery.

The government official also said that the North appears to be using the equipment to build another 100,000-kilowatt light water reactor on their own.

Intelligence sources also told the JoongAng Ilbo that the North could possibly use them to build a new underground nuclear test site in Punggye-ri, North Hamgyong.