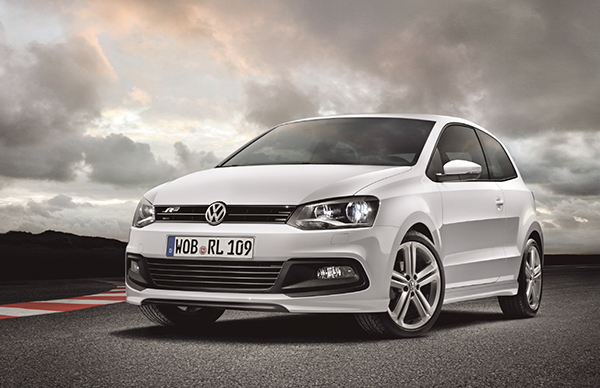 
Volkswagen has its sights set on selling more than 20,000 units next year in Korea by reinforcing the small-sized car market with the introduction of the Polo and Golf.

The German automaker announced its 2013 plan yesterday and said that it hopes to sell 23,000 units next year, up 35 percent from this year.

“2013 will be our second leap forward,” the company said in a release.

“We will reinforce our position in the small car segment and boost our existing best-selling models to expand our market.”

Its goal to increase 35 percent of sales next year is perceived as an aggressive plan, considering what other researchers have predicted for the imported car market.

The auto brand, which currently ranks third in the imported car market, has been enjoying a successful sales tally this year.

It sold 2,022 units in November, which was the first time the automaker exceeded the 2,000-unit mark in a month. With this trend, Volkswagen Korea said it will safely reach this year’s sales goal of 17,000 units.

The company said this year it tried to focus on boosting its presence in the midsized car market by introducing the new Passat and CC and improving its stylish brand image by releasing models like the Scirocco, Golf Cabriolet and the Beetle. 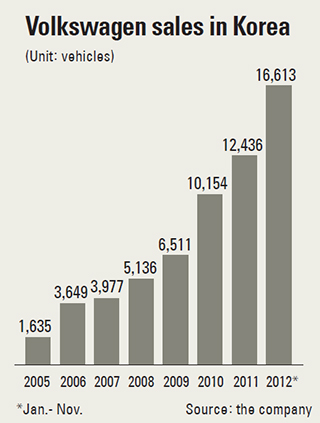 Next year it will release the Polo for the first time in Korea in mid-2013. The small car is currently the third best-selling car in Germany behind the Golf and Passat.

“We expect that the introduction of the Polo will lead the new trend in Korea’s small car market and produce new customers,” Volkswagen Korea said.

In late 2013, the German brand is set to introduce the Golf which has been beloved by Korean drivers. It sold 5,364 units last year to be the best-selling small-sized imported car. This year the model also sold 5,611 units.

Volkswagen Korea said that it will also try to diversify its lineup by offering gasoline-powered models. It will also promote models equipped with TSI or GTI engines.

The brand has been harshly criticized by local customers in customer satisfaction, particularly with after-sales service. According to a recent survey from Marketing Insight, a local market research group, the brand has been selected as the worst along with BMW, with customers citing long waiting times and expensive costs.

Volkswagen Korea currently operates 21 showrooms and service centers, but the company said until March, it will open new stores in Seoul and Jeju as well as new service centers in Incheon and Jeju.