Former Fringe director talks about the art of successful festivals

Former Fringe director talks about the art of successful festivals 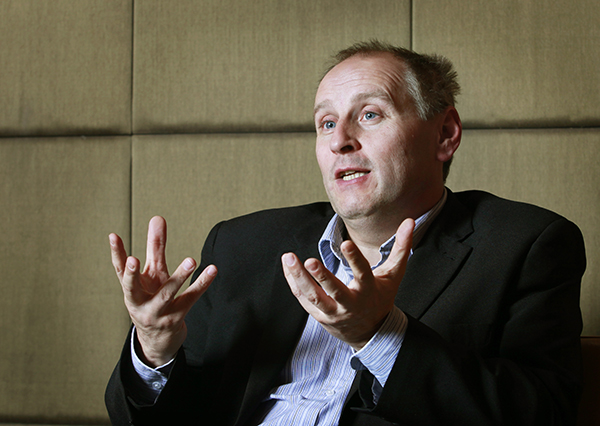 Festival guru Paul Gudgin strode into a lecture hall at Artist House in Dongsung-dong, central Seoul, last month to an eruption of applause more in keeping with Hollywood award ceremonies.

The audience - mostly city officials, festival organizers and others interested in the festival business - seemed intent on hearing what the 49-year-old former director of the Edinburgh Festival Fringe had to say.

The question and answer session continued for more than 90 minutes on the last day of Gudgin’s appearances in Seoul.

Gudgin has 20 years of experience in festival management and planning, serving as director of the Fringe from 1999 to 2007. This year, nearly 2,700 shows were staged from 47 countries over 25 days at the world’s largest and most famous arts festival.

The Edinburgh festival has had many directors in its 65-year history, and Gudgin is perhaps the best known for doubling the size of the festival during his tenure. And although the Fringe maintained a strong presence in Britain, Canada and Australia before Gudgin, it became a global brand after his appointment.

During a recent interview on his last day in Korea, the Korea JoongAng Daily sat down with Gudgin for a wide-ranging discussion on such subjects as why he left the Fringe when the festival was at its peak, the struggles of Korean festivals and the enduring beauty of festivals. 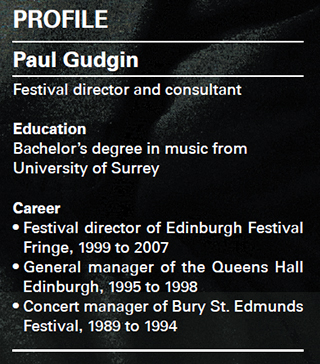 Q. This is your fourth visit to Korea, but many Koreans still seem to have a lot of questions for you. What did they most want to hear during your three days of lectures?

A. They are mainly interested in the Fringe because Korean shows were quite successful there. In my very first year, “Nanta” came to the festival in 1999 and then another nonverbal show, “Jump,” came and quite a lot of Korean shows. I think they try to understand what we did, what made it successful and how they can adapt those things to their own festivals. They are also interested in the Fringe model, how it works and how you do a show there. But a lot of questions were related to marketing.

It’s about a small number of people trying to communicate with a large audience. I think that always defines part of the festival character. I think that’s interesting and the job is very different. Prior to and during the festival, it is crazy.

But maybe at other times of the year, it’s a bit more relaxed. If you work in the industry, you need to get used to the festival tempo of working. It’s also a business that is full of people who love what they are doing, which is nice because people are not doing it for money, but because they love jazz, books, films, whatever. It’s a really interesting industry to work in.


Hundreds of new festivals are launched every year, but many of them evaporate. Like you said, it must be an interesting industry to work in, but it doesn’t seem easy to become successful.

No, it’s not an easy business. There’s a joke. How do you make $2 million in the theater? You start with $5 million. It’s very easy to lose money. Festivals do fail, but one of the joys of festivals is they are not expensive to start. It’s not building a theater or establishing a symphony orchestra. You can start with one person, one idea and one laptop. It’s also possible for festivals to grow very quickly. The downside, again, is they can regularly fail, as well. But I suppose it’s healthy in some ways. If one festival dies, 10 new ones will surely start soon. Organically, festivals tend to respond to public taste much better [than any other cultural events]. 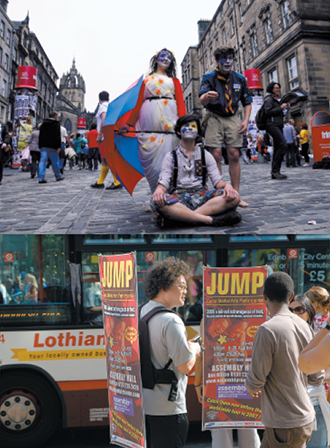 The spirit of the Edinburgh Festival Fringe is simple: Anyone can come and perform, as shown in a scene from the last year’s festival, top. A group of Korean performers, above, promote “Jump” in 2006. [JoongAng Photo]

Of the many elements of festivals, what’s the most important?

I suppose one of the two crucial things is programming. That’s what your festival is all about. The second thing is probably marketing. It’s about communicating the energy of the festival to the audience. And the thing that takes most of your time is raising money, always.

You worked for the Fringe for eight years. Tell us the issue that bothered you most during your term.

My team and I had to bring in some revenue if we wanted to grow and develop, although the Fringe had a strong reputation in places like Canada, the United States and Australia.

So what did you do?

My main goal was make the Fringe work for performers because they are the people who create the festival. The key principle of the Fringe is that anybody can perform there. We don’t select them. The way we could ensure the quality of the performances was by making awards. It’s like a film festival. People want to be in Cannes because if a film is successful there, maybe wins a prize, it will be successful in other parts of the world. So these things go together. If you give performers better opportunities, it means better performances. And the reputation of the festival grows. The reason why the festival’s reputation grew in Korea is largely because of Korean performers. Korean performers came, they had a good time and they talked about it. Even an international reputation can often be driven by performers themselves. That’s been the same in other countries as well. Quality goes up when more opportunities are given.

It seems like media across the world also contributed in taking the Fringe to the next level by running stories of the festival and performers. Can you tell us your marketing strategy to grab the attention of the world’s media?

If you give the media strong stories, then they will come. In addition, the media’s main source of information is other media. I think that what we’ve gotten good at doing is spotting stories. It might be someone who uses crazy venues. We also tried to get into every section of newspapers - travel, gardening - and every type of media. We tried to find stories for every type of media, tabloids, television and radio.

The other thing is the Fringe is uncensored. We also get a lot of controversial productions. As long as it isn’t illegal, it’s not censored at all. It’s great coverage for the media. Whether it is touching, political or homosexual, all these shows come to the Fringe. Even though the coverage is negative, we are still happy to get it.

Korean communities are endeavoring to create their own successful festivals. You name it and we have it all, from ginseng to mushrooms. Why do you think most of them are struggling?

There are struggling festivals everywhere in the world. It is never easy to find funding. I always hope to never make it sound easy. Sometimes money is the problem, but not always. One of the main problems is festival organizers are too concerned about what happens on the stage. A huge part of the festival is social experience. Festivals mean mixing with other people. If a festival dominates a town, it creates an amazing energy. Some of the very best festivals happen in very small towns partly because of that. They take over. If you are in the town, you’re in the festival.

It’s like a big jigsaw puzzle. Some pieces fit together easily and some take forever.

Tell us about yourself. You studied classical music, but how did you get into this business in the first place?

I studied music. I was always one of those people who organized concerts. It was very natural for me to work for a music festival. From there, I went to a small mixed festival in a small town and then I went to a concert hall. It was a big venue for a festival and that gave me an opportunity to get a job at the Fringe. I was lucky with my first job. That’s where I got my love for festivals.

Why did you leave the Fringe when the festival was at its peak?

I chose to finish. I wanted to finish while I still enjoyed the job. I wanted to finish while I still had something to offer. After my eight festivals, it was one of those years where everything seemed to go very well. I couldn’t imagine getting much better than that and that was the time. But a lot of festivals do have a limited time for contracts because they need new ideas and they need to go in slightly different directions. I was really well aware of it.

What was the direction during your term?

I wanted to make sure the festival would keep going. That’s a challenge because the festival is probably too big already for the city. But you can’t stand still. You are either growing or declining. I had to find ways of trying to help the festival.

After leaving the festival, you’ve launched your own company, Paul Gudgin Festival and Event Management.

Mainly, I’m involved in lecturing about festival events and also consulting for cities and individual festivals. I’m still involved directly in one or two festivals. It’s a lot of traveling and trying to teach them from my experiences.

What comes to your mind when you think of a festival?

Which do you find easier, being a festival director or a businessman?

Ultimately, you never quite get the same excitement that you got from festivals. But I’ve been so lucky for four years. I managed to visit so many interesting places. I love meeting festival people who have great energy. And I’m sure that at some point I’ll be back to festivals.