Kospi to rally next year no matter who wins

Kospi to rally next year no matter who wins 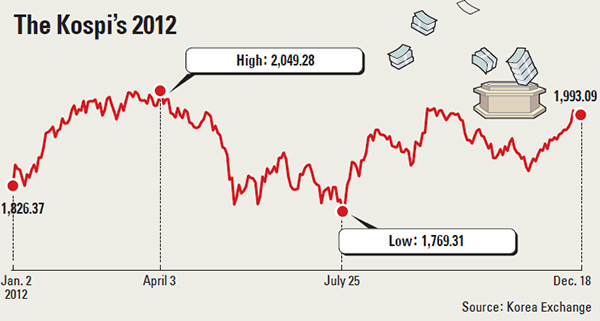 The Korean presidential election is likely to give a boost to the local bourse for many months - regardless of who wins.

According to analysts at securities firms, the Kospi soared 29.7 percent on average in the first years of presidencies since Roh Tae-woo took office in 1988 after the first direct presidential election in decades, citing data from the Korea Exchange.

In year after Roh Tae-woo took office, the restoration of democracy in Korea, the Kospi actually rose 72.8 percent.

“Generally speaking, the local stock market rises for a year after a presidential election and the stock index reaches its new peak in the second year of presidencies,” said Lee Da-eul, an analyst at Korea Investment and Securities. “The Kospi tend to rise in the first year of presidency due to investor’s approval of fresh policies and economic stimulus measures released by the new administration.”

All Korean presidents, who are limited to a single five-year term, have rolled out big stimulus packages within 100 days of coming into office.

Current President Lee Myung-bak had campaigned on a “747” plan, promising the country 7 percent annual GDP growth, $40,000 per capita income and Korea becoming the seventh-largest economy in a decade.

Kim Dae-jung eliminated restrictions on foreign investment in the local stock market to boost the economy.

“Under the five-year single presidential term in Korea, a new administration aggressively pushes an expansionary budget policy,” said Kang Hyeon-cheol, an analyst at Woori Investment and Securities. “So February and March will be good timing for buying stocks.”

Some analysts suggested the Kospi’s gains next year may end up a temporary rally depending on how global economic uncertainties in Europe and the United States play out. Korean financial markets generally respond sensitively to external market conditions.

They said external factors are likely to have a greater effect on the local stock market next year compared to the outcome of the presidential election.

When President Lee took office in 2008, the Kospi plunged 30.6 percent his first year in office after the global financial crisis sparked by the U.S. subprime mortgage crisis dealt a blow to Korean financial markets.

The Kospi jumped by 33.6 percent in the second year of Lee’s term, however, thanks to Lee’s 747 plan and cross-country canal project (which later changed to the four-rivers restoration project).

Meanwhile the Kospi gained 10.02 points to finish at 1,993.09 on Tuesday. Yesterday, the local financial market was closed as presidential election day is a national holiday.