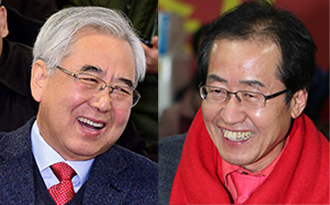 Key by-elections for superintendent of the Seoul Metropolitan Office of Education and the governorship of South Gyeongsang closed yesterday in the shadow of the presidential race with conservatives winning both positions.

Conservative Moon Yong-lin won the position left vacant by former superintendent Kwak No-hyun, who was sentenced to jail for bribery, according to the official ballot count from the National Election Commission yesterday.

Last Friday, a fifth candidate, conservative Rhee Sang-myon, stepped down from the race to endorse Moon after ballots were already printed.

The new Seoul education superintendent, who will supervise 1.26 million students in 2,206 kindergarten, elementary, middle and high schools in the city with a budget of 7.6 trillion won ($7 billion), steps into office today to complete what remains of Kwak’s four-year term, which runs until June 2014.

Kwak advocated controversial education policies, including a student bill of rights promoting freedom of dress and abolishment of corporal punishment. He also supported free lunches for all students.

He was sentenced in September to a year in prison on charges of paying 200 million won to his opponent to drop out of the race in the June 2010 election.

Moon supports getting rid of examinations in the first year of middle school but backs the national scholastic aptitude tests and autonomous schools, which the major liberal candidate pledged to abolish.

The Lee Myung-bak administration introduced autonomous high schools in 2009 that are outside the lottery system that assigns most students to schools and choose students based on their own admission standards, which have faced criticism for increasing competition.

There were 26 local elections in 19 provinces and cities yesterday alongside the presidential election, according to the National Election Commission.

The other key by-election, for the governorship of South Gyeongsang, traditionally a conservative stronghold, saw the Saenuri Party win a major victory.

In a two-man race, Saenuri Party candidate Hong Joon-pyo came out with 65.1 percent of the vote, ahead of liberal independent Kwon Young-ghil at 34.9, according to polls as of 10 p.m. yesterday.

Hong, 58, has a prosecutor background and is a four-term lawmaker and former Saenuri Party chairman.