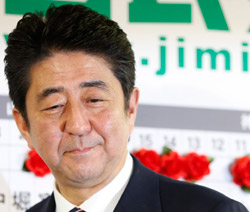 The new leaderships emerging in Korea and Japan may try to skate over diplomatic glitches of the past few months to give bilateral relations a fresh start.

With President-elect Park Geun-hye scheduled to take office on Feb. 25, Shinzo Abe, Japan’s prime minister in waiting, put off his plan to upgrade the status of the Takeshima Day from a provincial ceremony to a government-level event, the Asahi Shimbun reported yesterday. Takeshima is Japan’s name for the Dokdo islets, and Takeshima Day has been celebrated by the prefecture closest to the islets, Shimane, on Feb. 22 since 2005.

Shigeru Ishiba, secretary general of Japan’s Liberal Democratic Party, which won general election by a landslide Sunday, questioned on television yesterday whether holding Takeshima Day on a government level “will be in the interest of security in Northeast Asia” and that “there is a need to ponder who will be glad to see working relations antagonized” between the two countries.

Last month, Abe expressed his intention to upgrade Takeshima Day by having the Japanese government host it at a national level.

Japanese officials told the media that Korea would have trouble inviting Abe to Park’s Feb. 25 inauguration if he upgraded Takeshima Day to a national celebration.

In the general election campaign, Abe and his LDP swung to the right, raising concerns in Korea that Japan would have an increasingly nationalist cabinet and bilateral relations would cool down even further.

President Lee Myung-bak’s unexpected visited to the Dokdo islets in August led to increasing tension with Japan in the following months. Tokyo continued to evade responsibility for the sexual enslavement of women of Korean and other nationalities during World War II.

Consequently, the two countries decided not to renew a $57 billion currency swap agreement that expired at the end of October and postponed bilateral finance talks.

But Abe said on Thursday that he would seek close communication with Park, stating that the countries shared values, economic ties and strategic beliefs. The prime minister further stated that considering the situation Northeast Asia is in right now, Korea is a country Japan should cooperate closely with to insure regional peace and security, especially in the aftermath of North Korea’s successful launch of a long-range missile earlier this month.

The incoming Japanese prime minister sent a special envoy, Fukushiro Nukaga, to Seoul yesterday to deliver a personal letter to Park today from Abe declaring that the two nations share strategic interests. Nukaga is a senior official of the Japan-South Korea Parliamentarians’ Union, a politicians’ association promoting friendship between the two countries.

The personal letter, the Asahi Shimbun reported, calls for an early bilateral summit.

In a speech Thursday, Park said that national security is a top priority and that she will try to promote reconciliation, cooperation and peace in Northeast Asia based on a “correct perception of history.” This remark was clearly directed at Japan and referenced Korea’s demand that Japan formally make amends for its misdeeds during WWII and colonial rule.