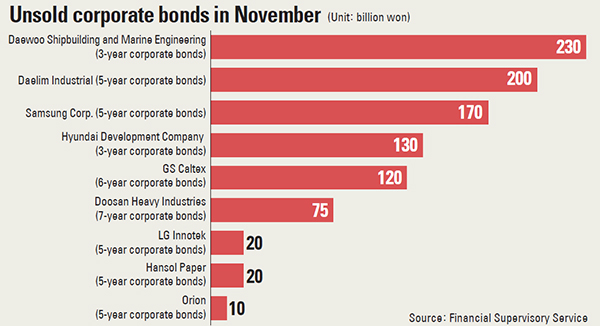 Institutional investors are increasingly taking a pass on corporate bonds of companies with credit ratings of A or higher because they question the credibility of the ratings, market watchers said yesterday.

Conglomerates with stable credit ratings of A or AA recently issued corporate paper to raise capital for projects but failed to attract institutional investors.

Asiana Airlines earlier this month conducted a so-called “book building” for 100 billion won ($93.1 million) in corporate bond, a process in which an underwriter determines investor demand and the estimated price for future bond sales by accepting orders from investors who indicate the number of bonds they want to buy and the prices they’re willing to pay. But none of the institutional investors participated in the process. The final demand was recorded as “zero.”

The unsold corporate bonds were taken over by six local brokerages including KB Investment and Securities, which oversaw the book building procedure.

Woongjin Holdings, which owns the nation’s No. 1 water purifier company, Woongjin Coway, and other stable affiliates, had an A- credit rating.

Korea Ratings, a local private credit agency, downgraded Woongjin Holdings’ rating to D from A- a day after it filed for a court receivership.

“The shocking news of Woongjin’s court receivership has completely drained investor confidence and this has led to SK Energy, which has a superb AA+ credit rating, becoming a victim of institutional investors’ escalating distrust of credit ratings,” said an analyst at a local brokerage.

SK Energy which originally planned to issue 500 billion won in corporate bonds with a maturity of three, five, seven and 10 years earlier this month, scaled back the amount to 300 billion won and cancelled its plan to issue seven- and 10-year bonds after its book building showed low demand. 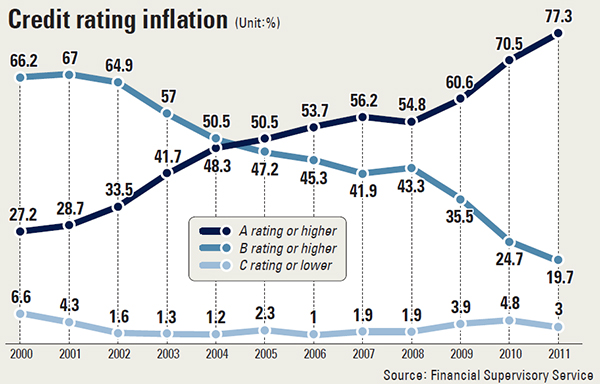 According to the Financial Supervisory Service, among 4.92 trillion won of corporate bonds that underwent book building processes in November, institutional investors only bought 2.8 trillion won. The remaining 2.12 trillion won, or 43.2 percent, were taken over by underwriters.

Daelim Industrial, which has a corporate credit rating of AA-, failed to sell its entire 200 billion won in five-year corporate bond to institutional investors. None participated in the book building process.

Samsung Corporation which has a corporate credit rating of AA, issued 200 billion won in five-year corporate bonds but 170 billion won was rejected by institutional investors.

“A-rated corporate bonds controlled 50 percent of overall corporate bond transaction amount in July but this figure has plunged to 30-something percent after September,” said Lee Hyeok-jae, an analyst at IBK Investment and Securities. “The distrust of companies with credit ratings of A or higher exists because these ratings don’t really alert investors to companies’ credit risks. When investors’ trust in the ratings is restored, the frozen investment will thaw naturally.”

Critics said the credit rating system is off-kilter. Ninety percent of the agencies’ revenues come from companies that request credit ratings from them. Those client company, which are planning to issue bonds, choose agencies that suggest the highest grade. This has forced agencies to inflate ratings, and institutional investors are now aware of that.

To improve the transparency of the credit rating procedure, FSS chief Kwon Hyouk-se said in November that the financial watchdog will ban companies from making oral requests about the credit ratings they are given from agencies starting in February.

The ratio of corporate bonds that received A or higher ratings now makes up 77.3 percent of all ratings, followed by B ratings’ 19.7 percent and 3 percent for C ratings in 2011, according to the FSS.

Meanwhile, Dongbu Securities forecast institutional investors will be more conservative in investing in corporate bonds next year due to the weak global economy.

It said institutional investors will buy corporate bonds issued by companies that received credit rating of AA or higher due to so called “learning effect” from Woongjin’s case.

“Considering the business climate of each sector, investors will find corporate bonds issued by automaker and IT industry attractive while investment attraction for bonds issued by construction, shipbuilding, steel and shipping firms is low due to a grim business outlook,” Park Jeong-ho, an analyst at Dongbu Securities.