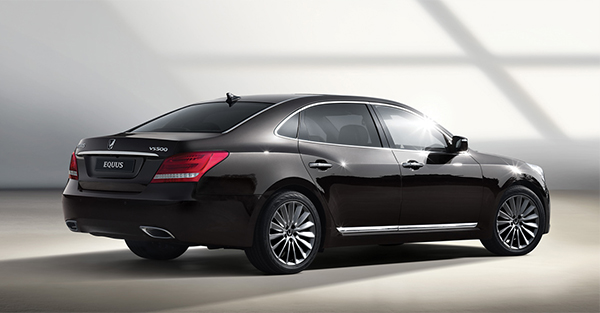 Hyundai Motor is again in the center of controversy over complaints that the Equus is almost twice as expensive in Korea than it is in the United States.

The nation’s largest carmaker unveiled the latest version of its flagship sedan earlier this month, the first time since March 2009 that the Equus has received a face lift.

In Korea, the Equus is available with the Lambda 3.8-liter or Tau 5.0-liter engines; only the latter is sold in the United States.

According to Hyundai Motor America, the 2013 Equus comes in Signature ($59,250) and Ultimate ($66,250) trim levels. The Ultimate is designed to be chauffeur-driven.

Since taxes and incentives vary from state to state, so does the price of a new Equus for American buyers. But those price differences are insignificant compared to the total cost of the automobile.

There are some slight differences between the American and Korean models. For instance, the Equus Signature does not have a forward-view parking and cornering camera, cooled rear seats and dual monitors for rear seats as standard equipment, unlike the Prestige.

That, however, does not matter much to domestic consumers, who are upset about the huge price difference. Considering that the U.S. models are shipped from Korea, they say, the Equus pricing amounts to discrimination against local consumers.

“I know Hyundai has been selling cheaper overseas, but this is really unpleasant,” read a posting on Naver. “I can’t believe Hyundai is a Korean company.” 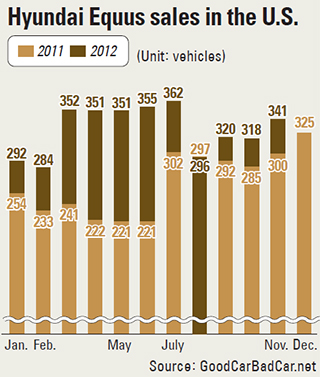 Hyundai said it has a different marketing strategy for the Equus in the United States and the domestic price is affected by various taxes.

“It’s not just us, but some other premium brands are also selling cheaper in the U.S.,” an official from the company said. “Besides, in Korea the tax imposed on automobiles is larger than in the United States, so that must be taken into account when talking about the local price.”

Industry insiders agree that different prices reflect different market situations. In Korea, the Equus is established as the top luxury vehicle, but many Americans prefer the Mercedes-Benz S-Class or BMW 7 Series.

“In the United States, Hyundai’s brand value does not match that of some of the other luxury marques, so it offers low prices to attract buyers who seek luxury sedans on a more limited budget,” said Kim Pil-soo, an automotive studies professor at Daelim University College. “But in Korea, Hyundai dominates the market, so there is still a demand for the Equus even at high prices.”

Experts also said that those who buy the Equus in Korea don’t care about price as much as they do about their image. They have Equuses, in part, to avoid the stigma of executives in Korean corporations and high-ranking government officials being seen in foreign cars. Corporate sales account for more than 70 percent of all Equuses sold in Korea, according to Hyundai.

In recent years, Hyundai has been trying to hone its image as a respected mainstream brand, and Equus was introduced into the U.S. market with that in mind. The automaker recently donated a specially made bulletproof Equus limousine to United Nations Secretary General Ban Ki-moon to use as his official car.

For 2011 and 2012, the Equus has sold about 300 units per month in the United States, but Hyundai has been pushing to increase that figure.

In addition to the low price, the company also has created a program to be known as “Your Time, Your Place,” in which a special sales associate will come to customers to demonstrate the vehicle, rather than making people visit a dealership.

There also will be a program, known as “At Your Service,” which includes valet service to provide pickup for all vehicle maintenance. The new Equus also comes with free maintenance, including oil changes and more, for five years or 60,000 miles, all with complimentary valet service included.