Seoul hopes Magok will grow into an R&D center

Seoul hopes Magok will grow into an R&D center 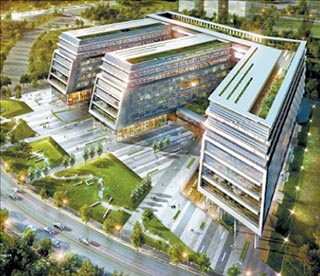 The design of E-Land’s research and development center that may be set up in the Magok Industrial Complex. Provided by the company

The Magok Industrial Complex in Gangseo District, southwestern Seoul, is a new hub for R&D centers.

“Magok Industrial Complex will be a ‘land of promises’ that will lead Seoul’s future in the industrial sector,” Seoul Mayor Park Won-soon said in a release.

The city government hopes the development in Magok will revitalize the relatively sluggish economy of southwestern Seoul.

The first company to confirm moving in, LG Group, will start construction of its buildings next year. It signed a deal with the Seoul Metropolitan Government early this month and said it will invest 2.4 trillion won ($2.2 billion) over 133,600 square meters (33 acres), which accounts for 18.3 percent of the total space in Magok.

The construction of LG’s buildings will be completed by 2020. Six of the group’s subsidiaries, including LG Electronics and LG Display, will have their R&D centers there with around 14,000 researchers.

“We have expedited the process for LG as it is a company that has far-reaching power and can bring more attention to the new industrial complex,” said an official at the city government.

Kolon has also shown interest in having its research center in Magok.

E-Land said one of the reasons for looking for R&D space within Seoul is to attract talented researchers to work for the company.

“It is easier for us to recruit talented young researchers just out of school when we stay within the city because recruits don’t want to work outside of Seoul,” said Yun Gyeong-hoon, an executive at E-Land’s communications team. “Besides, as we are expanding further in the global market, having our R&D hub within the capital city gives us benefits as it is convenient to stay connected with the world.”

“There are some companies currently talking about the option, so once we recruit one international business to settle in Magok, it will become easier to attract others,” he said.

The Magok Industrial Complex is 728,402 square meters is size and is only two kilometers (1.25 miles) from Gimpo International Airport.