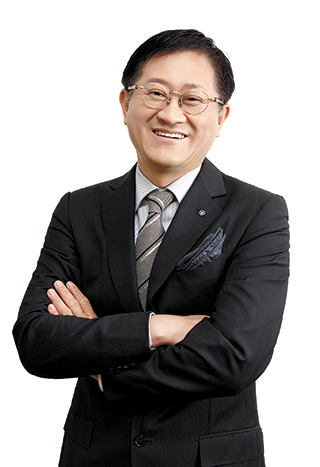 It has been over six decades since AmorePacific became Korea’s top cosmetics producer, but Suh Kyung-bae, its chairman and CEO, wants more than that.

His goal is promoting AmorePacific to represent “Asian beauty,” which he believes will set a new global standard in the cosmetics market. Sulwhasoo, its top-notch Oriental herbal skin care line, and mergers and acquisitions of already established foreign brands are key elements of his plan to become the top cosmetics maker in Asia by 2020 and the seventh in the world.

“I am sure the unprecedented category of Asian beauty is bringing a paradigm shift in the cosmetics market across the globe,” Suh said in an e-mailed interview with the Korea JoongAng Daily recently. “The unique spirit in Asian beauty that prioritizes the harmony between nature and human being has garnered more limelight than ever before.”

The Sulwhasoo makeup brand advanced into Hong Kong in 2009, entered the United States in 2010 and then China last year. Its presence in Asia has continued to grow in Asia this year with forays into Singapore, Taiwan and Thailand. Its unique combination of quality Korean herbal ingredients and luxurious brand image are attracting more customers than ever before.

The 67-year-old company, which currently owns 20 cosmetic, seven household and three health care brands, has seen its sales revenue double in the past two years - largely thanks to robust overseas sales. The figures have been good news for Suh, who inherited his post in 1997 from his father and has since focused on increasing sales overseas.

The acquisition of Annick Goutal, a French perfume boutique, last year marks the first M&A deal for AmorePacific, and Suh expressed his strong willingness for additional deals in the near future.

“Clinching an M&A pact is easy, but sustaining and nurturing the acquired company is an extremely difficult job,” he said. “But we have grown confident about it, given our global business capacity fostered through past experience.”

The following are excerpts from his recent interview.

Q. What are AmorePacific’s strategies when it comes to targeting global markets?

A. We have taken the strategy of separating the global markets into two: a growing market centered around Asia and an advanced market around the United States and Europe. In China, our core market at the moment, we run two categories of brands - top-notch ones such as Sulwhasoo and Lirikos and premium ones including Laneige, Mamonde and Innisfree. We are now gearing up to enter additional markets with greater growth potential such as South America and the Middle East. Given that the respective markets have different standards of beauty, we intend to continue market research efforts.

Sulwhasoo has been immensely popular among consumers overseas. Why do you think this is?

I believe that Asian beauty will transform the global beauty standard in the 21st century, given that the beauty paradigm is rapidly shifting from the West to Asia. A slew of multinational brands have been a waging fierce battle for leadership in the global market, but it’s hard to find one that represents Asian value. I think Sulwhasoo has high potential to become one of these brands, given that it is unique for combining oriental and traditional ingredients with a modern touch. 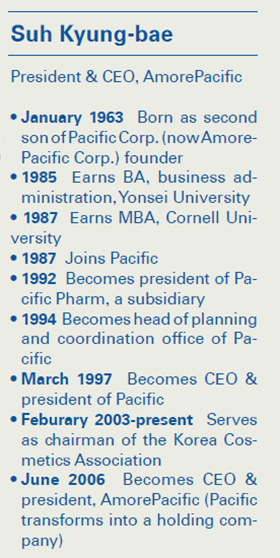 A large number of Korean cosmetics products have seen unprecedented popularity in China lately. What is AmorePacific’s view of China?

AmorePacific’s sales revenue has grown by an average of 35 percent in the past five years in mainland China, and I believe growth will accelerate further. We entered China in the 1990s and focused on a stable revenue-building structure over the past decade. From 2011 to 2021, we are aiming at rapid growth there, beating previous sales records. Since we have launched only five brands there out of the entire 30, there is almost unlimited opportunity awaiting us. In tandem with diversifying our brand portfolio, we will also beef up online and door-to-door sales. The completion of a factory and an R&D center in Shanghai in 2014 is also expected expedite the China business momentum.

Could you provide examples of how AmorePacific’s strategy specifically targets Chinese consumers’ consumption patterns and tastes?

China already has over 3,000 cosmetics brands, and countless brands are being created and eliminated every day. Over 100 million people out of the total 1.3 billion are believed to be using cosmetics, and more are expected to start using beauty products soon. The increasing disposable income among the Chinese people is also noteworthy and should contribute to consumption of cosmetics products domestically. The market is turning into a fiercely competitive battleground among countless brands, and it is crucial for AmorePacific to establish itself as a brand that can deeply penetrate into the minds of consumers. Toward the goal of becoming a top-three cosmetics brand in China by 2020, we have been hiring and fostering employees who best understand the local market and trends. We are also stepping up research into customers in China using partnerships with dermatology departments at three major hospitals belonging to leading universities, including Beijing University.

What other regions do you consider to have great growth potential?

According to Euromonitor International, a market researcher, the global cosmetics market was sized at $399.1 billion last year, up 4.5 percent from a year earlier. While growth in advanced economies such as the United States and Europe stagnated at around 0 to 1 percent over that period, regions like Asia and South America saw over 10 percent growth. That explains why those two markets - Asia, in particular - will lead in coming years. We are currently preparing for active marketing and sales efforts across Indonesia, India and Thailand.

Can you describe your management philosophy?

My father Suh Sung-hwan, former chairman and founder of AmorePacific, placed top priority on “trust” when it comes to management. Growing up, I saw him trying his best to keep his promises to provide quality products to customers, to sustain business relationships with partners and to offer a pleasant working environment for employees.

I inherited the spirit and have added another value, communication. I think that an ideal top manager always helps employees do their best when it comes to job responsibilities by creating an efficient work schedule and space, among other things.