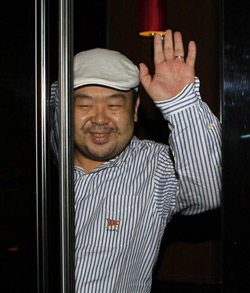 Kim Kyong-hui, the younger sister of the late leader and the aunt and political protector of new leader Kim Jong-un, reportedly persuaded her nephew to allow his half-brother to make the visit.

Some foreign media reports said the eldest son could have visited Pyongyang after the death of his father on Dec. 17, 2011. This was the first time an official from the South Korean government confirmed the fact.

The two half-brothers are supposed to have tense relations after the oldest son was passed over for his younger brother.

The official said that Kim Kyong-hui reportedly told the new leader that it was “a moral law” that a son pay his respects to a father after he died.

Apparently, the aunt put restrictions on Kim Jong-nam’s visit: that it would remain a secret, he would pay his respects but not attend the funeral, and that he should leave the country as soon as possible.

“Aunt Kim’s role in the visit of Kim Jong-nam shows how much her power has grown after the death of Kim Jong-il,” a source familiar with North Korean affairs said.

Since Kim Jong-il suffered a stroke in August 2008 and selected his youngest son as his heir apparent, Jong-nam has been purged from North Korean politics and lived in exile, sometimes in Macau.

In mid-December, rumors arose that Kim Jong-nam had defected to South Korea. Government sources said those rumors were wrong.