President-elect Park Geun-hye on Monday named Rep. Yoo Il-ho of the ruling Saenuri Party as her chief secretary in her first appointment since being elected South Korea's first woman president in the Dec. 19 election, her aide said.

The 57-year-old Yoo, a two-term lawmaker, had long served as a researcher at state-run economic policy think tanks before being elected to parliament in a southern Seoul district in 2008. He studied economics at Seoul National University and taught at two U.S. universities -- University of Pennsylvania and Cleveland State University -- in the 1980s.

The son of a former lawmaker, Yoo is an expert on tax policy and welfare. He is noted for contributing to Park's successful election campaign in the metropolitan area.

Park also appointed conservative columnist Yoon Chang-jung as her chief spokesman, according to Rep. Lee Jung-hyun, the communications director for the incoming president. 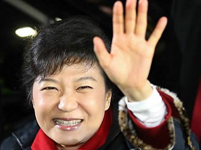 Rep. Lee also said that Park has named former vice culture minister Park Sun-kyoo and former ruling party lawmaker Cho Yoon-sun as her spokesman and spokeswoman. Both have worked as spokespersons under the president-elect during the presidential campaign.

"(The appointees) have talked with president-elect Park on policy issues over a long period of time," said Lee.

The appointed officials vowed to support the president-elect realize her pledges.

"I feel immense responsibility. It is the first move by the Park Geun-hye administration to prepare for the (next) five years," Yoo said in an interview with Yonhap.

Yoo, who said he did not expect the appointment, pledged to "flawlessly" serve as chief secretary to fulfill Park's efforts to make a country where all citizens can prosper.

Meanwhile, Yoon said it is his "duty" to help the president-elect.

"It is my duty to help make the Park Geun-hye administration a successful one. For the country. That is patriotism," Yoon wrote in his blog.

The appointments signal the start of efforts by the 60-year-old politician to set up a presidential transition team in preparation for her inauguration as president on Feb. 25.

Sources in the ruling Saenuri Party said other appointments such as the chairman and senior officials of the transition team are expected to be announced within the week.

Park is likely to take a prudent approach in appointing transition team members since they are expected to take part in the cabinet after the team's two-month term is over.

Meanwhile, Park is expected to appoint a figure who symbolizes political unity to lead the roughly 100-member transition team, which is half the size compared to previous transition teams, according to the sources. (Yonhap)