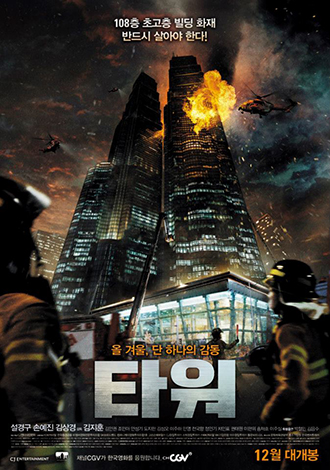 According to the Korea Film Council on Dec. 26, the latest Korean movie “The Tower” chalked up more than 430,000 views on its first day of opening.
The film, which officially opened on Christmas, raked up 431,759 views in just one day, and if you include the early-bird screening which took place close to midnight on Dec. 24, the numbers are around 553,311.

Going by the first couple of days, the movie is expected to hit the 2 million mark in its first week.

The action movie revolves around heart-pounding stories of rescuers and the people trapped inside a luxurious building following a fire that takes place during Christmas celebrations.

The movie incorporated some cutting-edge computer graphics.
Some 1,700 cuts out of 3,000 are computer generated images and 500 of those cuts are full 3-D cut scenes.