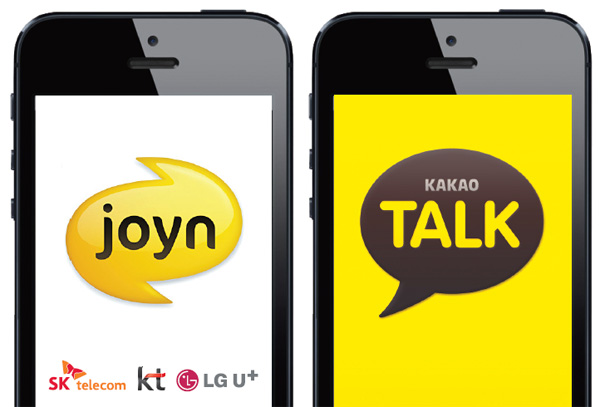 Korea’s three mobile carriers, which have been threatened by the emergence of free mobile messengers led by KakaoTalk and Line, have joined hands to launch a next-generation mobile communication platform called joyn.

The collaborative move indicates that the mobile service providers have determined to give up their earnings from text messaging services as their new rivals have been undermining the carriers’ profits by offering their texting services for free. In contrast, carriers charge 20 won ($0.02) per SMS.

The app will also be available for PCs, whereas KakaoTalk, the nation’s most popular mobile messenger with 35 million domestic subscribers, only offers a mobile version.

Joyn became available on 22 Android-powered smartphone models as of 10 a.m. yesterday on Google Play and app stores run by carriers. An iOS version will debut early next year, but the exact release date has not yet been revealed.

All smartphones - except for Apple’s iPhone - and feature phones that come out next year will be embedded with the app.

“The launch of joyn basically means the era has arrived for text messaging to become entirely free of charge,” said an SK Telecom spokesman. He denied claims that the service was devised to compete with mobile messenger services.

“The timing is coincidental,” he said, adding that, “joyn naturally arose in tandem with the evolution of telecommunications services. The first-generation services enabled SMS, the second made possible longer texts [including MMS], image and video, and the third came with joyn.”

Launched by SK Telecom, KT and LG U+ domestically, joyn has been developed by 220 carriers and smartphone producers around the world since 2008.


All of them are GSMA members. Korea is the first Asian country to unveil the service and the third in the world after Germany and Spain. Many others are expected to follow suit early next year.

Smartphones users and those who subscribe to a GSMA-affiliated mobile carrier will be able to chat and exchange files over the mobile network regardless of what model phone they use from early next year. 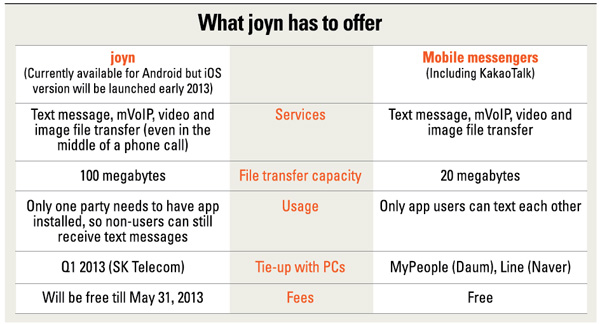 The GSMA predicts that the number of joyn users will reach 150 million by the end of 2013 and 740 million by 2016. But given that the majority of the Korean smartphone users are already accustomed to the likes of KakaoTalk, which is almost three years old, it remains to be seen how much of an impact joyn will make.

When joyn is transformed into a paid service on May 31, carriers plan to charge 20 won per SMS and 0.6 won for every second it takes to transfer a video clip.

But SK Telecom, the top player, said it plans to allow all of its 3G and faster long-term evolution (LTE) subscribers who join the service before this deadline to use it for free indefinitely, unless they shift to another carrier. However, the plan is apparently not set in stone.

“It is liable to change,” said an SK Telecom spokesperson.

KT and LG U+ have yet to unveil their charging plans.