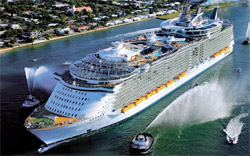 STX Group, the country’s fourth-largest shipbuilder, said yesterday it has won a deal to make the world’s largest cruise ship.

It said STX France, its European unit, will construct the 225,000-ton vessel under the deal with Royal Caribbean Cruise, the world’s second-largest cruise operator.

STX France will finish building the cruise ship by mid-2016, the group said. The vessel, measuring 65 meters (71 yards) wide by 361 meters long, will be the world’s largest cruise ship with the capacity to accommodate 6,360 passengers and 2,100 crew members, according to the group.

The deal includes an option to build another cruise ship later on.

The group did not reveal any financial terms for the contract, but market watchers say the group is probably charging either the same as, or less than, what it billed its clients for two previous cruise ships.

Industry insiders say as the cruise industry is expanding from North America to Asia, orders will keep coming in.

According to Cruise Line International Association, the number of cruise ship passengers jumped 10.2 percent to 16.3 million in 2011. Asian and European passengers increased by an average 26.6 percent, it added.

“We were able to clinch the deal in recognition of the excellent quality of our previous two cruise ships,” a spokesperson for the group said. “The latest deal indicates that the global cruise ship market is beginning to recover.”