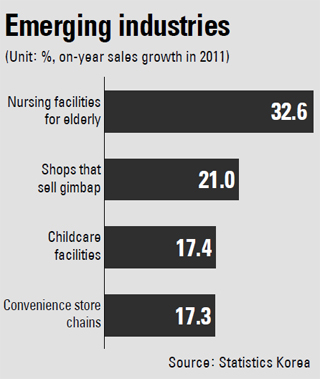 The market for convenience store franchises grew seven times faster than that of other service industries last year due to an increasing number of single-person households.

Eateries that specialize in selling gimbap (seaweed rice rolls), nursing facilities for the elderly and childcare facilities also enjoyed a boom both in 2011 and 2012 in tandem with the changing social structure of Korea’s graying society and as people delay getting married.

On the other hand, the number of small mom-and-pop stores shrank as they were pushed out by large discount store chains and corporate-run supermarkets. Due to the sluggish state of the real estate market, property sales and leasing declined significantly as well. The market for private education also showed signs of stagnation. 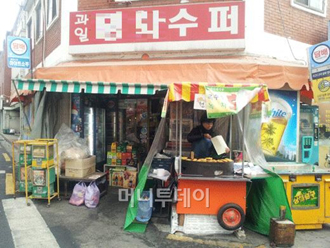 Sales of the entire service sector grew 8.3 percent to 1395.9 trillion won over the same period.

By business segment, wholesale and retail was up 10.5 percent, lodging and restaurants rose 8.2 percent, and health and welfare services climbed 9.3 percent. But sales and leasing of real estate fell 8.2 percent.

In the retail industry, the rich-get-richer and the poor-get-poorer trend was still evident.

The number of convenience store chains increased 22.1 percent and their sales increased 17.3 percent.

Statistics Korea cited the shrinking size of households, which has led to more frequent small-scale food purchases, and easy entry due to small capital requirements for the rapid growth in convenience stores.

However, the number of supermarkets, with the exception of large discount chain stores, declined 0.8 percent last year, yet their sales and staff rose 12.5 percent and 5.8 percent, respectively.

In the lodging and restaurant industry, sales posted by stores that sell gimbap and other snacks jumped 21 percent due mainly to the increased number of one- to two-person households. On-year sales growth of Korean food restaurants in 2011, such as those that sell seolleongtang (ox bone soup in a white broth) and raw fish, stood at around 5 percent.

Sales of nursing homes and welfare facilities for the elderly increased 11.9 percent and 32.6 percent, respectively.