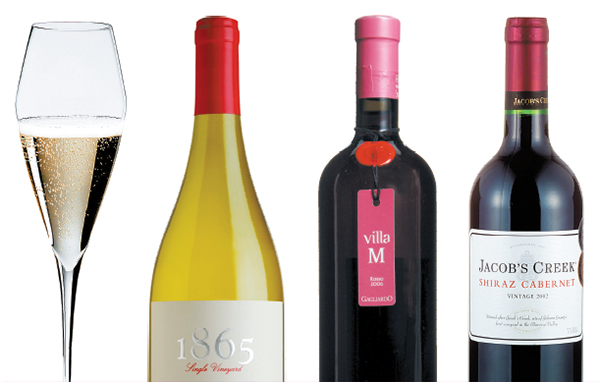 From right, Jacob’s Creek Shiraz Cabernet, Villa M Rosso and 1865 Sauvignon Blanc are some of the most popular wines especially among consumers in their 20s and 30s as they are affordable and trendy. Photo by each company


A housewife surnamed Min who is in her early 30s said she visits the wine section every time she heads to her local supermarket, a discount store, making her part of a cultural shift away from beer and distilled liquor as wine becomes both cheaper and less elitist in the country.

An office worker surnamed Kim who lives alone often purchases a bottle of wine at a convenience store on his way home after work.

“I buy wines at convenience stores as they are cheap and I can get small-sized bottles,” said Kim. “I drink them on special occasions and also with dinner.”

While a bottle of Romanee-Conti retails for a staggering 13 million won, wine has shed its image as expensive and out of reach for most consumers, who know they can pick up a zesty red for as little as 10,000 won.

And whereas in former years Korea’s wine drinkers tended to prefer bottles in the 100,000 won to 200,000 won price range, they have since found their way into large discount and convenience stores and the hearts, and livers, of the masses.

Breaking with the stereotype that wines should be reserved for special occasions, consumer awareness of them as an every day drink that can be enjoyed at home with dinner is growing rapidly, industry figures say.

According to the Korea Wines and Spirits Importers Association (Kwsia), the volume of imported sparkling wine surged 40.5 percent from January to October compared to the same period last year. In contrast, wine as a whole is up 9.9 percent.

The association said consumers are more likely to splurge on mid-priced sparkling wine these days than expensive bottles of champagne as buyers get younger, with female consumers in their 20s and 30s one of the top demographics. It added that men in their 40s have diversified away from sparkling wines and are now increasingly gravitating to reds and whites.

“When wines first became trendy here people wanted to be seen sipping expensive brands and vintages to show off their wealth. But now they’re happy to spend much more modestly,” said Kim Jun-cheol, chairman of the Korea Wine Association.

E-Mart, the nation’s largest discount store chain, now has a separate wine section at its outlets and displays those worth 10,000 won to 30,000 won most prominently to lure buyers. It saw a 16.2 percent jump in sales in the first 11 months compared to 2011.

According to Lotte Mart, all wines sold at its stores this year cost between 9,900 won and 32,000 won, with 1865 Carbernet Sauvignon the most expensive.

At convenience stores, sales are increasing rapidly. 7-Eleven posted a 15.7 percent jump in the first 11 months on-year, with wines priced below 20,000 won leading the charge.

At CU, formerly Family Mart, on-year wine sales surged 40.5 percent this year from last. The only time they failed to hit this high water mark was during the hot summer months, when beer sales typically go through the roof.