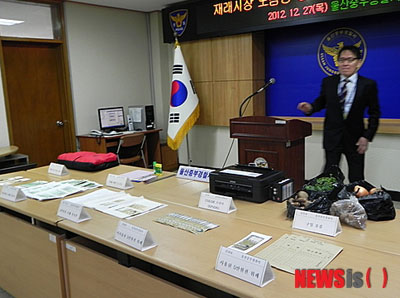 The police arrested a recently married couple on charges of producing and distributing counterfeit banknotes worth 1.5 million won ($1,400) over a nine-day period from Dec. 17 until Tuesday.

The Ulsan Jungbu Police Precinct reported Thursday that the suspected husband, surnamed Kang, and his wife, who is nine weeks pregnant, counterfeited 50,000 won and 10,000 won notes with a color printer at their one-room studio in Ulju, Ulsan.

The investigators said the couple, who married in October, visited traditional markets in Busan and Ulsan and paid for goods with the fake money, receiving around 1.3 million won in real money in change from market merchants.

The two suspects committed their crimes at night when it’s dark to avoid being caught, mainly targeting store owners in their 70s, the police said.

The couple reportedly decided to print fake money after the 31-year-old husband quit his job as a deliveryman for a restaurant and could not pay for living expenses amounting to over 1.2 million won a month.

The police said the couple purchased a 260,000 won color printer, spending every penny they had left, and made their own money. The two reportedly learned how to counterfeit from the Internet.

The police began their investigation into the distribution of fake notes when it received a report on Dec. 22 that two fake 50,000 won notes were found at a market in Jung District, Ulsan.

The police identified the two culprits and arrested them Tuesday.