Vice chairman of the 2007 transition team offers advice for Park

Vice chairman of the 2007 transition team offers advice for Park 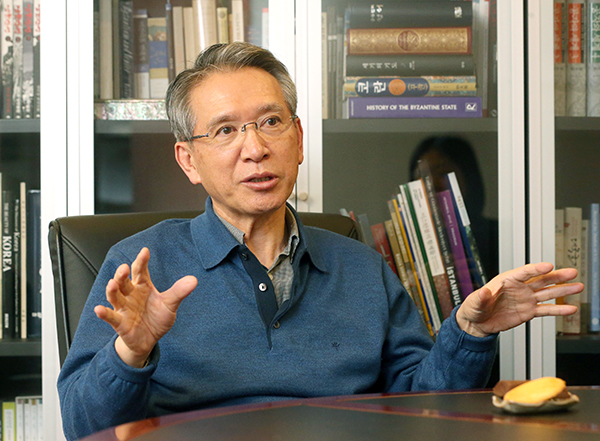 
On Christmas Day 2007, President-elect Lee Myung-bak, who six days earlier had won a landslide victory in the presidential election, released a list of members of his transition team. Lee appointed a four-term veteran lawmaker of the Grand National Party, Kim Hyong-o, as vice chairman. The incoming president felt the team would need his administrative skills.

After serving on that critical committee, Kim went on to serve as speaker of the 18th National Assembly for its first two years and surprised many by not running for an Assembly seat in this year’s April legislative election.

The 65-year-old Kim quoted General Douglas MacArthur’s famous line, “Old soldiers never die; they just fade away,” in hinting what would lie ahead for him in coming years during an interview with the JoongAng Ilbo on Dec. 21.

“Old politicians don’t retire either,” he said in his office in Mapo District, central Seoul. “They just fade away.”

Q. How did you get on the transition team five years ago?

A. On Dec. 25, 2007, President-elect Lee asked me to lead the transition team as vice chairman. I think the president thought I was fit for the position as I was in charge of overseeing his pledges and policy drives during the campaign.

How did the transition team carry out its mission?

To be honest, the team at first lacked a clear definition of its administrative role and limitation. The 2007 election marked a change in power [from liberals to conservatives] after 10 years, and as a result it was rather challenging to receive assistance from the predecessor Roh Moo-hyun government.

The team’s willingness to work hard was in overdrive. The president-elect should take enough time to design his or her transition team as it will be seen by public as a symbol of how the next administration is going to guide the country. It is also the very first appointment of positions by the president-elect and a sign of how resolute the next president is in managing state affairs.

The appointment of the transition team chairperson and presidential chief secretary, however, should be done rather quickly. The head of the transition team should come from something like a prime minister background and continue to work in the administration after the inauguration in February to ensure the continuity of policy drives. As for the presidential chief secretary, he or she should be someone well aware of politics because, after all, all issues are brought to their conclusions politically.

What affairs should the transition team focus on?

For the two months during which the committee is run, tremendous public attention will be directed at the team. Its members, however, should not feel compelled to produce and announce policies to satisfy the ever-rising attention.

The 2007 transition team at one point came under criticism because of its supposed “I-can-do-anything” attitude. There are three things the committee must do.

Second, and most importantly, the transition team must prioritize pledges advocated during the campaign and draw up a timetable and budget plans for implementation. Also, the committee should look at what policies from the previous administration should be continued by the incoming administration.

Third, it should set up a system that is institutionalized so personnel changes down the line do not affect policy -making processes.

No one objected to our government ministry downsizing plan five years ago except for those directly related to those offices. Revival of those ministries should not be a return to an old style of administration. The administrative offices should change with the times with their sights set on the future.

The Lee administration faced an unexpected challenge only a few months after its inauguration: The protests against U.S. beef. What do you think caused such a strong public backlash?

The newly launched Lee government worked tirelessly with no weekends off. Buried in work, officials failed to look back on the people’s wishes and tended to lead them into what they considered the right direction for the country to be heading.

The vigils and protests against U.S. beef stemmed from the Korea-U.S. free trade agreement. Importing U.S. beef was one of the core issues in the agreement. To the public, the whole process [in which Lee agreed to U.S. beef imports in a move to speed up the FTA] seemed too rushed.

What advice would you give to President-elect Park?

I would tell her to go to every corner of the country to hear people’s voices. I particularly recommend her to visit Gwangju first [in a symbolic gesture to unite the country’s ideological and regional schism]. Meeting with farmers [worried about the effects of imported agricultural products because of free trade agreements] and CEOs of small to medium-sized companies would also be helpful.

I believe with the mindset of a mother of the people, Park will be able to narrow the generational, regional and social divisions in the country.

Another piece of advice I wish to convey to her is to have a deep trust in government officials. They are the country’s most competitive and qualified group of people. In 2007, there was an impression [among the transition team members] that government workers were mere followers of the boss, the Blue House, especially since the 2007 election marked a change in power after 10 years.

The new government should encourage officials to go for well-intentioned competition and create an environment in which they can work with creativity.

Also, personnel policy must prioritize ethical values. For those determined to guide the country toward change, ethicality should be regarded as the most important criteria in fulfilling one’s mission.

The region from which a person comes from should not be taken into consideration in personnel policy. Whoever is deemed fit to successfully plan and carry out reform-minded policies should be put into a job regardless of their regional backgrounds, whether its Gyeongsang or Jeolla.

The 2012 presidential election ultimately became a one-on-one battle between a conservative and liberal candidates.

The campaign of the Democratic United Party’s Moon Jae-in failed to convince the people that they stood for the kind of change people wanted. Instead, they looked like an old-style political group to voters. The widely known political adage that liberals are for change and conservatives are for stability did not apply this time. It is a very good thing that Park gave a call to her defeated rival after the election. Moon’s remark that he has now “given up on his dream [of the presidency]” was also an impressive note.

To choose their new leader in a direct battle between conservative and liberal candidates, 75.8 percent of eligible voters in the country came out to cast their ballots in temperatures of minus 10 degrees Celsius (14 degrees Fahrenheit). I hope this election is the last presidential election based on ideological divisions.

“New politics” was a main issue during the campaign. How should the National Assembly be thinking of changing itself to meet that demand?

State audits should be done before September rather than the current one that takes place in October.

Some politicians bring items such as snakes and explosives to the audit to attract media attention, which discredits the work of other Assembly members who study for hours for the audit.

The National Assembly should be open to holding more plenary sessions.