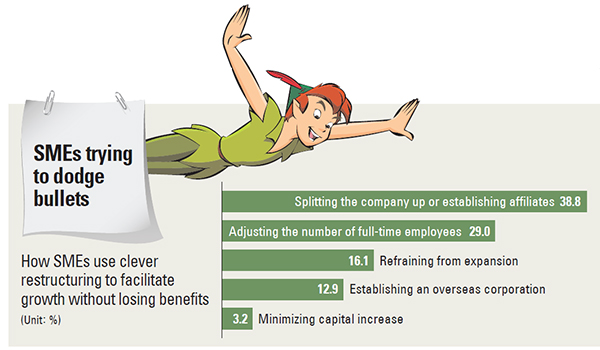 About one-third of SMEs are suffering from what has been dubbed the “Peter Pan syndrome,” meaning they refuse to grow into large enterprises as they hope to benefit from numerous forms of state support. Currently, the government offers SMEs up to 160 incentives and support programs.

Among 105 SMEs that are classified as being borderline large companies, 31, or 29.5 percent, said they have deliberately acted to avoid developing into larger enterprises or are planning to do so, such as by artificially adjusting their organizational structure, according to a survey by the Federation of Korean Industries (FKI).

One company with 249 employees added 80 new staff at its headquarters but falsely credited them as belonging to its overseas subsidiaries to keep it under a certain threshold that entitles it to government subsidies. If companies have over 300 domestic-based personnel on their books they are no longer ranked as SMEs.

According to the Minor Enterprises Act, if a company has over 100 billion won ($93.63 million) in equity capital and has posted average annual sales of 150 billion won or more for the past three years, it automatically loses its SME status.

This effectively causes 160 benefits such as tax credits, deductions and the availability of certain sales channels to disappear overnight, according to the Ministry of Knowledge Economy.

“SMEs can get 3 percent of their investment back through income or corporate tax deductions. Some of their R&D spending can also be deducted from their corporate income taxes,” said a spokesman for the Small and Medium Business Administration (SMBA). “But once they grow into large companies they can no longer enjoy such benefits.” 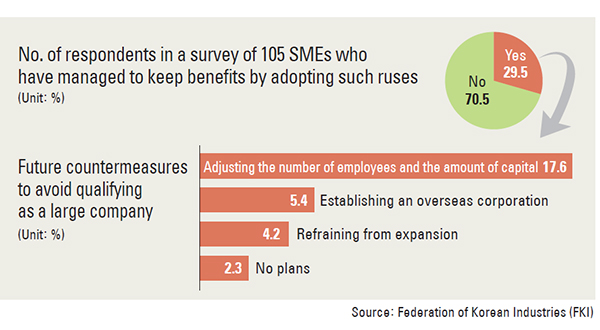 According to the results of the survey, three in 10 SMEs have been dancing around the restrictions so as not to lose out when they could otherwise have moved up to the rank of a large company.

Of these, 38.8 percent established new branches, 29 percent reduced the number of their full-time staff by reclassifying them as temporary workers, 16.1 percent lied about revenue and 12.9 percent moved their production base overseas, the survey showed.

However, the FKI and industry observers expressed concern that should the trend continue it could eventually destroy the nation’s corporate ecosystem.

“Almost all SMEs refuse to get bigger as they know all too well that in the course of doing so, their government subsidies will dwindle and the regulations they are subject to will intensify significantly,” said Kim Young-soo, a research fellow at the FKI’s SME Cooperation Center. “In the long run, there won’t be a balanced allocation of state resources and the corporate ecosystem could be damaged.”

When the survey asked why there was a bottleneck in terms of SMES being upgraded to large companies, almost half cited what they called the “institutional difficulties” involved such as the end of said benefits (24.8 percent of respondents) and the tightening of market entry and other regulations as well as stricter audits (22.3 percent).

When asked whether policy changes could help squash the Peter Pan syndrome, 40.7 percent of respondents said measures should be taken to motivate SMEs to make the leap.

“Rather than discouraging companies from growing by giving them more of a burden, the government should provide motivation by offering differentiated policies and diverse growth paths,” said Yang Geum-seung, director of the SME Cooperation Center.