Left: President-elect Park Geun-hye visits a community center for the elderly on Dec. 25 in Changsin-dong, northeastern Seoul. Right: North Korean leader Kim Jong-un and his wife Ri Sol-ju visits the family of a worker on Changjon Street, an upscale area in Pyongyang, on a recent but unidentified date. [YONHAP]


“I hold your father, former President Park Chung Hee, in high esteem in terms of how he developed the nation.”

That was what North Korean leader Kim Jong-il told Park Geun-hye in May 2002, when she visited Pyongyang as chairwoman of the Europe-Korea Foundation. She was invited to the North and had a one-on-one talk with Kim for an hour, without any aides, in the Paekhwawon State Guest House in northeastern Pyongyang.

The meeting drew public attention because it was the first between the son of North Korea’s founder Kim Il Sung and the daughter of South Korea’s strongman Park Chung Hee, die-hard cold war adversaries. At the meeting, Kim apologized for his father’s sending of spies in an attempt to kill Park Chung Hee in 1968. They reached the Blue House and 28 North Korean agents were killed, while two escaped and one was captured alive.

“It was an erroneous act by a group of extremists,” Kim told Park. “I feel sorry for that. They were punished for that.”

Eight weeks from now, Park will be sworn in as president of South Korea, and she will have to deal with Kim’s son Jong-un, who is starting his second year as leader of North Korea.

President-elect Park has said that she won’t avoid meeting with the new leader of North Korea. On Nov. 5 she said she “will meet with North Korea’s leader for improving inter-Korean relations,” suggesting a summit will be one of her goals as president.

Although they are of different generations - Park is 60 and Kim is in his late 20s - the two actually have a lot in common aside from being born into power families.

Park studied in France after she graduated from Sogang University, while Kim attended a school in Bern, Switzerland in the late 1990s.

Park lost her mother at the age of 22, when a Korean-Japanese shot her in 1974. Kim lost his mother, Ko Yong-hui, at the age of 20 when she died of breast cancer.

After her mother’s death, Park acted as South Korea’s de facto first lady for about five years before her father was killed by his own spy chief in 1979. She learned a lot about government at that time. Kim was his father’s heir-apparent for several years and made public appearances in that capacity during the two years before his father’s death. 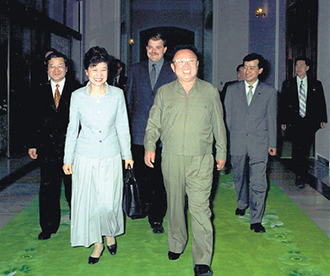 Park Geun-hye, left, who visited North Korea as chairwoman of the Europe-Korea Foundation, walks with then-North Korean leader Kim Jong-il, right, in the Paekhwawon State Guest House in Pyongyang on May 13, 2002 to dinner after a one-on-one meeting. [YONHAP]


Still, analysts aren’t at all sure that a summit is possible between Park and Kim, particularly after the North successfully launched its Unha-3 rocket last month. Some told the JoongAng Ilbo that the rocket issue will become the first North Korean issue Park will have to deal with after she is inaugurated.

South Korean government officials told the JoongAng Ilbo that the North seemed to be surprised by Park’s victory.

“The ruling Workers’ Party’s political strategists, who had predicted the liberals would win the election and reported it to their leader, must have faced troubles,” a government official said. “We could witness a repeat of 2007, when several North Korean officials who were in charge of dealing with Southern affairs were purged.”

In fact, Pyongyang stepped up its propaganda for the victory of a liberal administration last year.

In 2007, the North’s state media issued an average of 52 news reports or comments monthly about Southern politics, mainly criticizing the then-opposition Grand National Party. Last year, the number of reports on Southern politics surged to up to 140 per month.

The Committee for the Peaceful Reunification of Korea, a mouthpiece of the regime in charge of anti-South propaganda, said on Nov. 3, “If the ruling Saenuri Party maintains power, it will be a repeat of the Lee Myung-bak administration and a revival of the Yushin dictatorship (or Park Chung Hee).”

A spokesman for the regime’s powerful National Defense Commission, chaired by Kim Jong-un, said in an interview in September, “Presidential candidate Park Geun-hye, the bitch, even mentioned maintaining the Northern Limit Line,” the de facto western sea border between the two Koreas, which Pyongyang doesn’t recognize.

In fact, it is rare for North Korea to denounce a person who has met with its leader, because that could suggest a flaw in the leader’s decision. The regime honors the two Southern liberals who had summits with former leader Kim Jong-il, the late presidents Kim Dae-jung and Roh Moo-hyun.

In 2002, when North Korea reported the meeting between Park and Kim Jong-il, they called her “Madam Park.” Kim sent a private jet to bring her to the meeting, and put her up at a state-run guest house for three nights and four days. He also reportedly agreed on opening a meeting place for reunions of families separated after the Korean War, a sensitive issue for the regime. He also allowed Park to return to the South by crossing the border through the heavily fortified village of Panmunjom.

However, the regime changed its attitude toward Park starting from 2007. During this year’s presidential election campaign, they called Park “a princess of the Yushin [Constitution].”

Still, analysts told the JoongAng Ilbo that even though the North Korean media lashed out at Park, it doesn’t necessarily represent the thoughts of the regime’s top officials.

Before the presidential election last month, a high-ranking North Korean official met with the JoongAng Ilbo in Beijing and said, “It won’t be that bad for us even if Park Geun-hye becomes the next president. I think if the children of former leaders do politics, there would be many common things between them.”

The official added that the reason the North’s media was so rough on Park is because of excessive competition among North Korean officials to prove their loyalty to their new leader.

Shortly after the election, the Northern media released a brief news report, saying, “The Saenuri candidate was elected.”

Since then, there have been no reports on her.

“North Korea will maintain its hostile stance against Park for some time in the future rather than reversing its attitude immediately,” said An Chan-il, a defector who now heads the Seoul-based World Institute for North Korean Studies.

“They will try to test the new administration’s position on North Korean affairs.”

Jeong Yeong-tae, a senior researcher at the Korea Institute for National Unification, said that the new leader Kim could have already studied the 2002 bilateral talk between his father and Park to get to know her leadership style.

“It is highly possible that Kim’s guardian Jang Song-thaek, a core member of the inner circle, could have already shown him some materials regarding the 2002 meeting in preparation for Park winning the election,” Jeong said.

Two months after Park proclaimed the Yushin Constitution in October 1972, which legally cemented his dictatorship, Kim was inaugurated as North Korea’s juseok, or supreme leader, through the regime’s communist constitution. Park, who was afraid of the U.S. army’s withdrawal from the South, proclaimed a so-called “self-defense” policy, while Kim launched his juche, or self-reliance, policy.

Both formed local troops of farmers in case of a sudden war between the two Koreas. Park launched the Homeland Reserve Forces, while Kim had his Worker-Peasant Red Guards.

However, Park Geun-hye’s rise to power was achieved democratically, while Kim Jong-un’s was anything but.