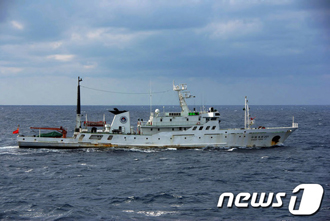 China’s State Oceanic Administration has decided to beef up its maritime surveillance activities by deploying more patrol vessels to prepare itself in the event of a confrontation with Japan and other neighboring countries over disputed islands, a Beijing-based newspaper reported yesterday.

The move is expected to deepen maritime tension between the world’s second-largest economy and Japan, which in the long run can also affect Korea.

Korea is also in a diplomatic row with China over Ieodo, a section of underwater reef located 92 miles southwest of Korea’s southernmost Mara Island.

According to China’s Global Times yesterday, the Chinese government decided to construct and locate 36 modern and high-tech surveillance vessels by 2015.

The report also stated that China will refurbish and reuse old Navy vessels as monitoring ships, which is seen as a move to enhance its surveillance operations to gain control over maritime security in territorial disputes over the Senkaku Islands in the East China Sea.

China is also engaged in a diplomatic row with several Southeast Asian countries including Vietnam over its claims to islands in the South China Sea.

As part of China’s latest monitoring activities, on Monday, three ships were spotted in the waters around the Senkaku Islands, according to Japan’s Coast Guard.

In response to this, Japan’s Kyodo News Agency said that Japan is considering using United States spy drones to enhance surveillance of its territorial waters near the Senkaku Islands.

“[China] has placed more maritime surveillance vessels in the waters as of late but there is still a big difference in the number of total vessels it owns compared to Japan,” said Yu Zhirong of the government’s Research Centre for Chinese Marine Development.

“[China] should have more modern vessels in case of emergency [potential military conflict].”

According to the State Oceanic Administration, China operates around 300 surveillance vessels whereas Japan has around 500.

Tokyo also has more surveillance aircraft in operation with 70, compared to the 10 operated by China.

“This is one of the serious, potential flashpoints in Asia,” Roehrig told the Korea JoongAng Daily.

As for what Korea can do, the professor said, “It should tread carefully concerning this dispute.”

“While many Koreans may be tempted to side with China on this issue [because of its conflict with Japan over the Dokdo islets], heightened tension between Tokyo and Beijing does little good for anyone,” he said.