Reps walk away from promises to mend ways

Reps walk away from promises to mend ways 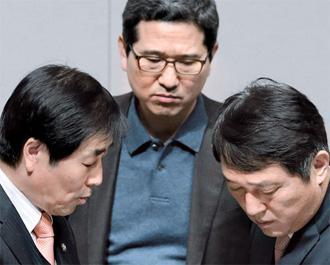 Months of promises by politicians in both the ruling and opposition parties to embark on a new path of cleaner politics evaporated swiftly once the presidential election was over.

Ahead of the Dec. 19 election, the ruling Saenuri Party and the opposition Democratic United Party competed on promises of reform, vowing specifically to give up lawmakers’ privileges and improve the way the National Assembly operates.

None of the promises made it into law or were realized in any other way as of yesterday.

The Saenuri Party was the first to announce its reform measures last June. It promised to bar lawmakers from holding additional jobs and said they would surrender their salaries if they failed to hold legislative sessions.

The ruling party also promised to give up the lawmakers’ immunity from arrest during a legislative session - a remnant of dictatorial days - and reform their pension system.

A promise to punish violence inside the National Assembly chamber was made, and to invite nonlawmakers to sit on the ethics committee. The party also created a task force to realize the pledges.

But the bill never made it to a voting session.

Now that the election is over, the whole notion of political reform seems like yesterday’s fad.

In the budget passed Tuesday morning, the National Assembly approved 31 billion won ($29 million) for the annual salaries of the 300 lawmakers for this year. Each lawmaker will receive 130 million won a year, the same as before.

The parties did nothing to scale down the budget for lawmakers’ pensions. The legislature approved nearly 12.83 billion won for the pensions by allocating the money to support elderly members of the Constitutional Government Society, an association of former lawmakers.

As of now, a former lawmaker over 65 years old - whether he or she served in the post for one day or many years - is entitled to 1.2 million won a month in pension payments.

In contrast, a Korean War veteran receives an average of 140,000 won a month starting this year, up from 120,000 won per month earlier. The promise to give up their immunity from arrest was broken back in July when the National Assembly struck down a motion to allow prosecutors to question Saenuri Representative Chung Doo-un over a savings bank scandal. The pledges to bar lawmakers from holding second jobs is also up in the air. Of the 300 lawmakers, 94 officially have other jobs such as lawyers, professors and certified accountants, but none formally gave them up.

“Without following through with the promises, we will lose the people’s trust,” Representative Kim Sung-tae from the Saenuri Party told the Joong-Ang Ilbo. “The Special Committee on Political Reform in the National Assembly must begin operations as soon as possible.”

Another Saenuri lawmaker admitted that reform is no longer a hot issue but promised to follow through with it.