Rookie band gets mention by the Grammys

Rookie band gets mention by the Grammys 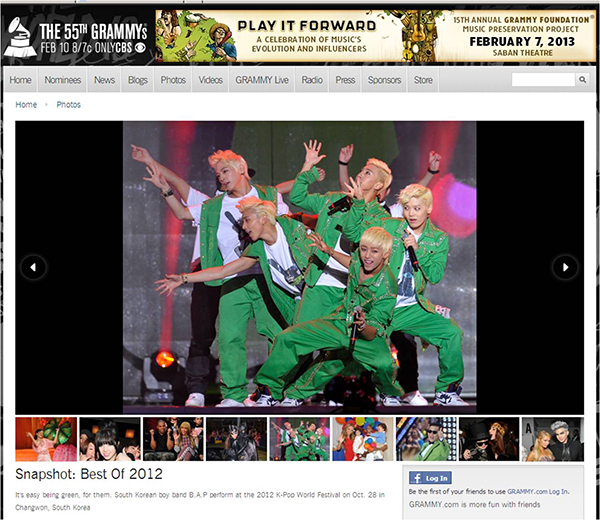 
B.A.P had a great year in 2012 and if you want proof just check out the picture and mention on Grammy.com.
In an online pictorial of the best moments from last year, the U.S. music awards’ organization posted a picture of the platinum-haired boys of K-pop.
The picture was taken from the group’s performance at the K-pop World Festival on Oct. 28 in Changwon, South Gyeongsang, amidst a rendition of the group’s hit “Don’t.”

Along with Psy, B.A.P was the only other Asian singer to make it on to the compilation.
Other singers to have made it into the online photo gallery were Pink, Mariah Carey and Justin Bieber.

B.A.P made its debut with “Warrior” early last year and shot to fame quickly with its songs doing well across the globe.
Its debut album managed to secure spots on Billboard’s World Album chart and iTunes’ hip-hop album chart.