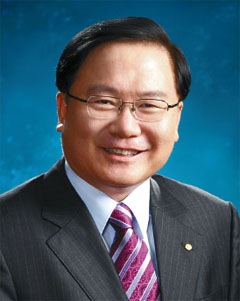 The 61-year-old judge will be the first former Constitutional Court justice to head the court if his nomination is approved by the National Assembly.

In the 24-year history of the Constitutional Court, all four chief justices were former Supreme Court judges.

According to Park Jeong-ha, presidential spokesman, the appointment was discussed with President-elect Park Geun-hye.

“Lee Dong-heub is the most renowned expert of the Constitution in the country who also has international insight,” said Park.

“While serving as a Constitutional Court justice, he issued judgments based on a strong will to defend the liberal democratic constitutional order and a firm belief in the law and principles.”

Park said the president believed he is the best candidate to head the Constitutional Court with his excellent insight and experiences.

The spokesman also added that sufficient consultations took place about the appointment with the president-elect.

Park Sun-kyu, spokesman of President-elect Park, also confirmed that the two leaders exchanged their opinions in advance to make the nomination.

A native of Daegu, Lee graduated from Seoul National University Law School and passed the bar exam in 1973.

After completing his judicial training, he started his career as a judge at the Busan District Court in 1978.

From September 2006 to September 2012, Lee served as one of the nine judges of the Constitutional Court.

The National Assembly is to hold a confirmation hearing on Lee’s nomination.

If the appointment is approved by the legislature, President Lee is to formally appoint him to the Constitutional Court.

Established in 1988, the Constitutional Court is an independent judiciary specializing in reviewing constitutionality.

Nine judges serve on the bench, and three of the positions are appointed directly by the president.

Three judges are appointed from nominations by the Supreme Court chief justices and the other three are chosen from the National Assembly’s nominees.

The chief justice among the nine, whose official title is president of the Constitutional Court, is selected by the president, and his or her term lasts for six years.

When Lee was chosen as a Constitutional Court justice in 2006, he won the post through the backing of the then-opposition Grand National Party, the predecessor of the current ruling Saenuri Party.

He is known for his conservative stances.

While serving as a Constitutional Court judge, he ruled that the ban on election campaigns using the Internet, including social network services, was constitutional.

At the time, six of the eight judges on the panel that deliberated on the case said the ban was partly unconstitutional, but Lee disagreed.

In the controversy surrounding the arrest of an Internet blogger in 2010, the Constitutional Court ruled as constitutional a telecommunications law that had been used to punish the famous stock market seer “Minerva” for allegedly spreading false information online.

The case has been seen as an important test for freedom of expression, and in the 7-2 decision, the court said the clause was unconstitutional.

At the time, Lee was one of the two judges who ruled the law was constitutional.

According to the Blue House press release, Lee had a?special interest in constitutional studies for many years even before joining the Constitutional Court in 2006.?

He lectured on constitutional litigation for nine years at the Judicial Research and Training Institute from 2001.