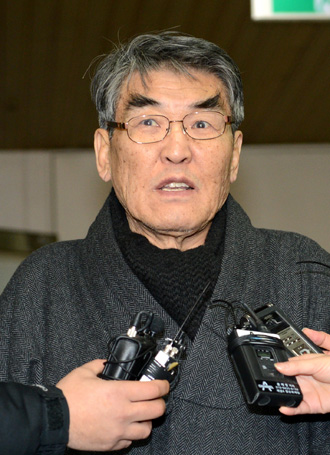 Almost four decades after being sentenced to death, a dissident poet who protested against the authoritarian rule of President Park Chung Hee was cleared of all charges yesterday in a retrial.

Poet and democratic activist Kim Chi-ha, 72, was sentenced to jail 39 years ago after being charged with violating the National Security Act and instigating a rebellion.

He was accused of organizing a pro-North youth federation plotting to overthrow the government and charged with violating the Presidential Emergency Decree No. 4, which was promulgated on April 3, 1974, to reign in students’ anti-state activities as well as outlaw the National Federation of Democratic Youths and Students, which was critical of the Yushin regime.

Some 180 members, mostly college students, were arrested on charges of plotting to bring down the Park Chung Hee administration, and eight were executed.

The Yushin Constitution, adopted in 1972 to empower Park’s rule, enabled the strongman in 1974 to promulgate a series of Presidential Emergency Decrees which included banning all activities opposing the new constitution and allowing violators to be arrested without arrest warrants.

Kim, the 1975 recipient of the Lotus Prize for Literature, accused the Yushin government of imprisoning him and using torture methods to extract false confessions from him.

The Seoul Central District Court yesterday acquitted Kim of charges stating that, “The defendant, on the grounds that he criticized the Yushin Constitution and opposed the government was sentenced to death and experienced great hardships afterwards.”

“We deeply express our apologies that the judicial branch at that time did not fulfill its duties,” said the court yesterday.

Kim’s 1970 satirical poem, “Ojeok (Five Bandits),” attacked politicians, businessmen and the military elite, portraying them as corrupt and was written in the cadence of pansori, traditional Korean opera.

The poet was arrested and charged with violating anti-Communist laws and “benefiting North Korea” for publishing the poem but released on bail that year.

Upon arrest and trial in 1974, Kim was sentenced to death. His sentence was then commuted to life in prison. After an outcry from home and abroad, he was released within 10 months. He was rearrested in 1975 for publishing another political poem and released in 1980.

Regarding the charges of violating the anti-Communist legislation in 1970, the Seoul court suspended the ruling, stating “because there was no evidence submitted regarding the cruel treatments during the Ojeok incident investigation, there are legal limitations.”

In November 2010, Kim submitted the case to the Seoul Central District Court and in October last year the court decided to commence a retrial. He plans to file a compensation suit against the state.