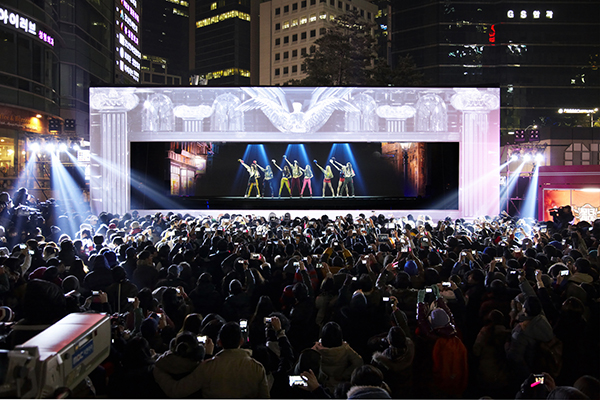 The nine members of Girls’ Generation showcased their fourth album, “I Got a Boy,” in a hologram concert near Gangnam Subway Station on Saturday as thousands swarmed the area, paralyzing traffic for three to four hours, SM Entertainment said yesterday.

During the performance, titled “Virtual Concert,” the 3-D holograms of the singers were shown on a makeshift stage as the group sang “I Got a Boy” and “Dancing Queen.”

The latest album, released 15 months after the group’s third, “The Boys,” consists of 10 songs of a variety of genres including dance and modern R&B.

Saturday’s concert, held before their official comeback through the SBS’ “Music Trend” yesterday, was the first time the group introduced hologram technology.

They also attended a talk show on the spot to talk about themselves, introduced the behind-the-scenes video for “I Got a Boy” and showed undisclosed photos of the Hallyu stars.