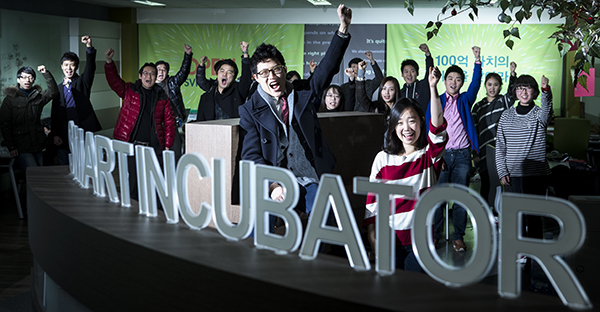 At the entrepreneurship center Smart Incubator, some two dozen CEO wannabes pose after receiving advice on starting up their own businesses. The center is sponsored by the Guro District Office and Korea Venture Business Association with the aim of fostering entrepreneurship. By Park Jong-geun


“I was certain the world was trying to crush me,” recalls Kim Dong-sin, director of the mobile game publisher GREE Korea, who created the hit smartphone game Hero City in 2011. The 33-year-old’s current title suggests a career that did nothing but go from strength to strength. In fact, a major part of entrepreneur Kim’s story is a series of business failures. In a period of three years, he watched four of his businesses go under.

“I tried desperately to find people to invest in my business,” Kim says. “I spent over a year just persuading them that I was not out of my mind asking them for their capital.”

When Kim was struggling to restart his career in 2009 following his four bankruptcies, the “Fail Conference” was begun in California’s Silicon Valley. Men and women in business exchanged stories of their failures. Word-of-mouth endorsement about the conference spread. Now it takes place in Singapore, Japan and Australia.

But not Korea. At the start of each year, the JoongAng Ilbo proposes a master plan of action for the nation. This year, the plan addresses the issue of entrepreneurship - and how Korea has to foster it by embracing the idea that failures don’t always lead to shame. Sometimes failure is a necessary stop on the road to success.

According to Loren Gary, associate director for leadership development at Harvard University’s Kennedy School of Government, Silicon Valley entrepreneurs typically experience 2.8 failures before they launch a start-up that manages to succeed.

But in Korea failures remain a stigma that repel investors, and young would-be entrepreneurs know it. As a result, people who may have been tempted to try to start businesses often play it safe and go for jobs at major conglomerates or government agencies. This is true of people with several languages and high college GPAs.

Lee Min-hwa, president of the Korea Venture Business Association, wishes it was otherwise. “One’s entrepreneurship deserves respect,” he says, “and trial and error in the process of promoting start-ups should be regarded as bravery and qualify for awards.” A change in people’s perception about business failures is needed, Lee added, before Koreans rush to set up their own companies.

Kim Byung-gun, now 34, used to be one of the young, typical job seekers with no dreams of launching his own company. After graduating from Parsons The New School for Design in New York, launching his own brand was the last thing he considered.

“But the design team I was on was suddenly dismantled and I had nowhere to go,” Kim recalls. He made countless attempts to find a job but was rejected - its own kind of failure. Finally, Kim decided to start his own artisanal handbag brand, WillC. “I thought new business opportunities were only for people working in the IT industry,” Kim laughs. “But I found opportunities in the area that I was good at once I started looking.”

Yang Jun-cheol, 28, who now heads an online-offline event company called Onoffmix, set up his first business designing Internet home pages at the age of 16. Before he turned 20, he had seen two of his business go under and had 20 million won ($18,800) in debt.

“I was very aware of the consequences of having my businesses go bankrupt here in Korea,” recalled the young CEO. “I figured it would take two to three years to recover from a failed business, so I decided to go for a challenge at an early age. I think my start-up experiences conform to an entrepreneurial spirit in which people are determined to lead their own lives, instead of having it led by others.”

According to a survey of 1,002 job seekers in their 20s by the job recruitment Internet site Albacheonguk (www.alba.co.kr) last September, only 4.9 percent said they intended to set up their own businesses. Almost half, 48.6 percent, said they would look for jobs at state-run firms or conglomerates. The idea that only someone who has failed to get a job launches a start-up is still strong.

Venturing into a new business is open to everyone, but success is never guaranteed. What is required in a successful entrepreneur is a complex combination of passion and rationality.

“Those preparing to start a new business should thoroughly examine its marketability as well as his or her passion for the adventure,” says Kim Young-hwan, founder of the 15-year-old English education software firm Prosigner.

“What’s more important than business ideas is the ability to take timely action as well as to manage risk,” said Huh Ji-won, who heads the education consulting firm EBN.

One model for start-ups is Israel, which, like Korea, lacks natural resources but is abundant with human capital. Israel’s RAD Group, which has five companies traded on the Nasdaq, is symbolic of Israel’s entrepreneurial spirit. Its founding principle “ischutzpah” in Yiddish means “audacity” and “courage” to go beyond convention and take on challenges. In other words: a rejection of knee-jerk skepticism.

One encouragement to audacity is shared know-how on start-ups. The Korea Chamber of Commerce and Industry’s Business Consulting Panel for small to medium-sized companies has been working to share know-how, so far providing over 1,100 consultations since the launching of its service in 2009. Providing consultation services for small start-ups will be a key to promoting the idea.

Another important element for Korea’s start-ups is capital. The success of the world’s largest video-sharing Web site YouTube illustrates how things can go well. What began as a technology start-up in 2005 was funded with 2 trillion won by an investor who cashed out his stake in the e-commerce Web site PayPal. Other investors or former employees of the e-commerce site also went on to invest or found a string of tech firms in Silicon Valley, creating an informal “PayPal Mafia.” 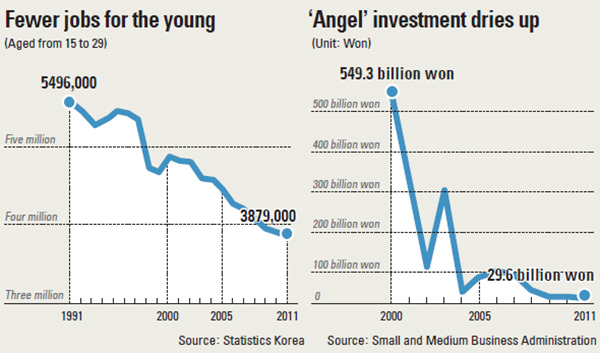 In Korea the situation is quite different. The amount of venture capital investment, or “angel investor” funding, shrank to 29.6 billion won in 2011 from 549.3 billion won in 2000, just before the IT bubble burst, according to the Small and Medium Business Administration.

“We need an investment environment in which investors could collect their returns through active mergers and acquisitions within three to five years after their first investment,” said Tommy Kim, CEO of Stonebridge Capital.

Another element important for entrepreneurship is sharing of stories about failure through a “healing system.”

Jeon won-tae, CEO of the Busan-based industrial gas company MS Corporation, is one of those businessmen who saw their companies go under. But the 65-year-old CEO made a comeback and now runs the energy firm, which employs 340 workers and generates annual revenues of 120 billion won. Hoping to share his experiences, Jeon spent 300 million won on founding a “healing” camp on Jukdo Island off Tongyeong, South Gyeongsang. During a month-long program at the camp, former executives who closed their businesses share their experiences to better prepare themselves for future opportunities.

“Those who considered ending their lives before coming to the healing camp find signs of hope just through discussions,” said Han Sang-ha, a camp organizer.

The Korean public could use a little healing in this regard too. They must update their idea that a business failure is an end to one’s career. These days, a business failure can end up being an asset to a society and can lead to some mega-success like YouTube or Facebook.