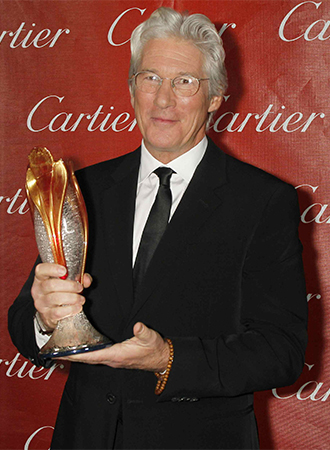 
PALM SPRINGS, California - Award-season hopefuls made their first stop of the new year in the middle of the desert a couple of hours east of Hollywood at the annual Palm Springs International Film Festival gala.

Though the 63-year-old Gere has never received an Oscar nomination, there were previous Academy Award winners aplenty at the Palm Springs gala. Among them, Sally Field, the night’s honoree for career achievement, including her hard-won role of Mary Todd in director Steven Spielberg’s “Lincoln.’’

“I still can’t believe I got the role,’’ Field replied, cracking a smile, adding “Did I get it?’

Turning serious, Field told the black-tie audience she was proud to be part of the film and happy to still be working. “I’m very lucky. .?.?. Next year it’ll be 50 years that I’ve been in the business as a professional. It’s been a wild ride,’’ she said.

So how does the phrase “Oscar nominee Bradley Cooper’’ sound to the “Silver Linings Playbook’’ actor?

“That would be incredible,’’ Cooper answered, explaining that he just may sleep through the pre-dawn nomination announcements. “Yeah, I’m sure I’ll get up, but maybe I’ll be asleep. I don’t know.’’

“And it has to do with those tables in still quite a small room,’’ she added. “They haven’t allowed it to get enormous. .?.?. Everybody table jumps and chats. It’s always slightly naughty. The hosts are always naughty. I can’t wait to have Tina Fey and Amy Poehler doing it. That’s going to be such fun.’’