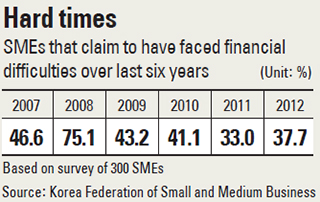 Over one-third of all small- and medium-sized enterprises are suffering from financial difficulties due to the economic slowdown and many are having related management problems, according to a recently released survey of 300 SMEs by Kbiz.

Some 37.7 percent of respondents said they are currently having financial difficulties, up 4.7 percentage points from a similar poll last year. This is the first time it has risen since the global financial crisis flared up in 2008.

The survey found that most SMEs depend heavily on loans and are wrestling with high interest rates. Some 80.3 percent rely on bank loans, 14.6 percent on government loan programs and 4.1 percent on stocks and corporate bonds for financing, according to the survey.

Of those who have borrowed from banks, the biggest complaint was about high interest rates (31.5 percent), followed by overly stringent qualifications for a loan (15.7 percent).

For other forms of financing, 27 percent of respondents pointed to the complicated procedures involved in issuing and registering corporate bonds as their biggest gripe.

Seven out of 10 SMEs, or 68.7 percent, said they would like to take out chattel mortgages to relieve their financial difficulties. These, in which the purchaser borrows funds by holding movable personal property as security, are not widely practiced by SMEs in Korea.

Many industry figures say they would like to see the system changed so that tangible assets, inventory-based assets, and agricultural, fishery and livestock products can be held as security for a loan.

“As the financial difficulties caused by the prolonged recession are appearing directly in the field of SMEs, the government will need to make extra efforts to stimulate the economy and activate domestic consumption,” said Choi Bok-hee, head of general policy department at Kbiz.

“The government needs to push for more bank loans.”

Meanwhile, 70 percent said they were not aware Korea plans to launch a third stock market called the Konex for SMEs and venture companies.

Also, 81.3 percent said that even if this is established they have no plan to list on it.