Graveyard shift is on the way out at Hyundai

Graveyard shift is on the way out at Hyundai 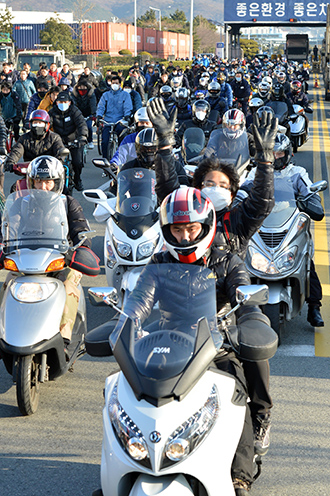 Hyundai Motor employees at the automaker’s plant in Ulsan leave from work after the first shift ended at 3:40 p.m. yesterday. The nation’s leading automaker is ending its overnight shift for the first time since the plant opened in 1967. [NEWSIS]

Workers at Hyundai Motor’s factories in Ulsan and Asan, South Chungcheong, stopped working overnight shifts yesterday for the first time since the company’s first factory in Ulsan went online in 1967.

The shifts are also slightly shorter than in the past.

The move came after 10 years of discussions between management and the labor union led to an agreement last August.

The company is testing the new shifts for two weeks to see if there are unforeseen problems. From March 4, the graveyard shift will be completely ended.

“Workers will be able to go home early and spend more time with their families,” said an official at the company’s labor union’s communication team based in Ulsan. “It’s been hard to stay up overnight when we are scheduled to work the night shift.”

“To respond quickly to changes in the auto market, Hyundai Motor, as contrasted with other global automakers in the U.S. and Europe, has inevitably relied on long shifts,” said the company in a release.

“However, management and labor agreed to overcome the global and local economic downturn together and as we started our new working system, we can not only enhance the quality of life and health of our employees, but also produce better-quality vehicles,” added an official at the company.

The automaker will also operate buses for workers getting off after midnight. It also recommends employees to car-pool.

It is also switched to monthly salaries from hourly payments.

The company planned to invest a total of 300 billion won ($282 million) to make the facility more efficient to make up for the slightly shorter shifts.

“With this two-week test run, we are checking how many cars we can produce to see by how much we need to enhance our facilities to increase efficiency,” said an official at the company’s communications team.

Hyundai Motor’s sister company Kia Motors is also ending night shifts starting March 4. The work hours will be the same as at Hyundai.

However, workers on some special manufacturing teams will continue to work some overnight shifts.

Already, many auto parts suppliers including Hyundai Mobis and Halla Climate Control said they are reviewing their manufacturing systems as well. Some have already confirmed a change.

“As we provide car modules that have to be immediately put on the body of a vehicle, we have to sync our work hours with the car company,” said an official at an auto parts maker.