The Floating Islands on the Han River are shown empty and forlorn looking yesterday. The three man-made islands have been empty for over a year even though their construction was completed. [YONHAP]


Seoul Mayor Park Won-soon said the Floating Islands in the Han River will be given a second chance.

A pet project of Park’s predecessor Oh Se-hoon, the three man-made islands were used once for a Fendi fashion show and then allowed to fall into neglect. They were also damaged by heavy rains in July 2011. 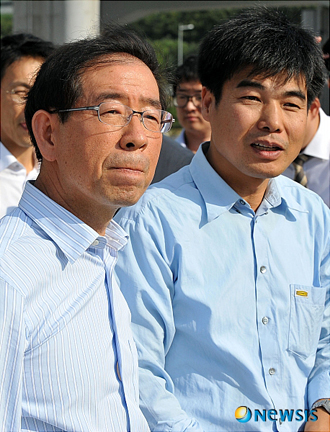 Park has been scaling back or changing many of Oh’s pet projects, but he said on MBC’s morning radio program “Son Seok-hee’s Focus” yesterday that he wouldn’t allow the Floating Islands to become white elephants.

He said they could be used as early as the first half of this year after the city renegotiates a contract with urban development company Flossom, which has the islands’ ownership for 30 years.

“We are currently discussing revising the contract with Flossom because many unreasonable conditions including the period of the contract were included in the corporation’s favor,” Park said.

“We expect that we can utilize the venues as a conference and exhibition hall as early as the first half of the year after we resolve all problems as Seoul recently became a popular city for international conferences and forums.”

The mayor said using the islands can’t be put off any longer because the city spent billions of won in taxpayers’ money to build them.

The Floating Islands were the first piece of former Mayor Oh’s Han River Renaissance Project to be completed. Flossom invested 139.2 billion won ($130.8 million) in them as a cool venue for events, Seoul’s version of Syndey Opera House.

They were inaugurated in June 2011 with a high-profile Fendi fashion show. Oh stepped down in August 2011 and Park was elected two months later.

The majority of the Floating Islands project was funded by private investors and the project was carried out by Flossom. But SH Corporation, a state-run construction company, owns 29 percent of Flossom.

The contract guarantees Flossom ownership of the Floating Island for 30 years in return for investing 66.2 billion won. The total investment however doubled to 139 billion won. Ownership was supposed to go to the city afterward.

Flossom wasn’t able to find a subcontractor to manage the islands. Some people call them the “ghost islands” because they’re deserted.

Regarding the issue of raising fares on Subway Line No. 9, Park said that he will not authorize the increase.

“The fare for buses and other subway lines were already increased last year,” he said.