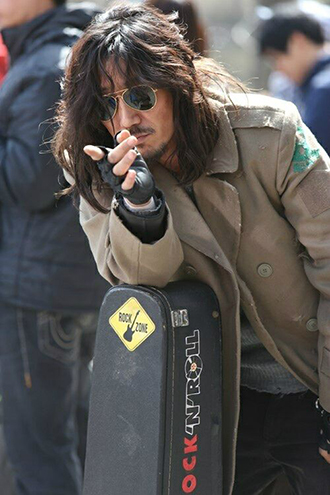 Rapper Tiger JK has taken on his first cinematic role in the upcoming movie “Around the World.”

In the feel-good Korean film to be released next month, the hip-hop artist assumes the role of a street musician.

In the teaser images, the 38-year-old has the hobo-chic look down pat, complete with fingerless leather gloves, a shabby coat, messy hair and a beard.

In the movie Tiger JK plays a character named Pil-hong, who despite his rugged countenance shows a lot of kindness toward the main characters, the homeless siblings Ji-ho and Sun-ho.

The singer will not only act, but sing as well as take part in an action scene all in his debut.

“I loved the scenario. It’s just the kind of story we need in this cold world we live in,” said the singer as to why he got involved. “At first I wasn’t sure I could handle the acting, but now I’m completely enamored with it.”