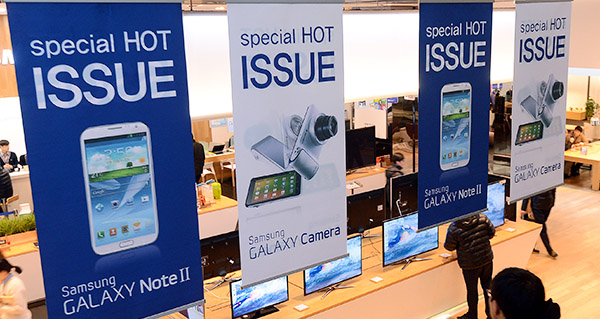 With world record-breaking revenues of over 200 trillion won ($188 billion) last year, Samsung Electronics has not only solidified its position as the leading conglomerate in Korea but has also grown to become a force to be reckoned with in the global marketplace.

Such lofty revenue is a first for any IT company in the world including rival Apple. Samsung’s revenues amounted to more than 16 percent of the IMF’s estimate of Korea’s 2012 GDP of 1,237 trillion won.

The achievement is especially impressive considering that the Korean firm broke the 100 trillion won mark just four years ago in 2008, and just two years later broke the 150 trillion won level. Operating profit has nearly doubled from a year ago and is now edging close to 30 trillion won.

Market observers said Samsung has been able to outgrow its competition mostly because of a production system that relies less on outsourcing component manufacturing than archrival Apple.

Japanese newspaper Asahi Shimbun reported yesterday that “Samsung has beat Apple in terms of revenue three years in a row and has become the world’s No. 1 player among IT companies.”

“It seems as Samsung reaped profits from smartphones that are popular in both developed and emerging economies,” Asahi reported on its Web site yesterday. “Whereas Japanese electronics firms are struggling these days conducting work force layoffs, their rival firm made remarkable and strong growth.”

Market observers say that Samsung now aims to become a top five player in the world in terms of market capitalization. It already ranks eighth with $229.6 billion as of Jan. 7, according to Google Finance. The top four are Apple with $492.8 billion, Exxon Mobil with $400.9 billion, Petro China with $261.6 billion and the Industrial and Commercial Bank of China with $242.7 billion.

However, challenges still lie ahead for the company as the IT industry?is more volatile than conventional?industries such as?automobiles or steel.

Nokia was once the leading mobile company in the world and Japanese electronics giants such as Sony and Panasonic once had the lead in?commercial goods like televisions. Now, they’re struggling to cope with rapid changes in the sector.

When only considering smartphones, Samsung and Apple are the two top players with the former controlling 31.3 percent in the third quarter of 2012, up from just 3.3 percent in late 2009, IHS iSuppli said. Apple has 20 percent of the market, it added.

Aware of potential sudden changes, Samsung Electronics Chairman Lee Kun-hee told?his employees at the beginning of the year to forget?the success the firm is?enjoying at this moment and?continue to strive for the future.

Meanwhile, shares of Samsung Electronics fell 1.32 percent to close at 1,500,000 won as the firm’s earnings were already reflected in the market. But analysts at local brokerage firms said Samsung stock prices will rise higher this year with the release of the Galaxy S4. Daishin Securities estimates over 5 million Galaxy Note 2 units had been sold as of November. Global sales of the Galaxy S3 surpassed 30 million units in November, just five months after its release.

“With the release of the Galaxy S4, it’s highly likely that the company’s semiconductor and display businesses will improve simultaneously and profits will increase with the stabilizing prices of memory semiconductors,” said Song Myeong-seop, an analyst at Hi Investment and Securities.

According to local stock information provider FnGuide, 23 out of 29 brokerage firms have forecast Samsung’s shares will rise as high as 1.8 million won. The average target price of Samsung estimated by 29 securities firms was 1,8450,00 won as of yesterday.

“Samsung is forecast to sell a total of 330 million smartphone units this year, up 52 percent on year,” said Lee Se-chul, an analyst at Meritz Securities.