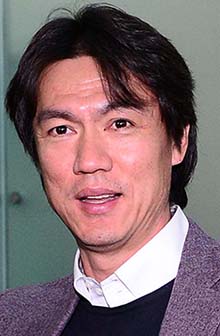 Former Olympic football coach Hong Myung-bo yesterday denied a rumor that his short, but much-hyped, stay with his mentor Guus Hiddink in Russia is to polish his resume to realize his next goal - becoming the national team coach.

Hong, 43, left yesterday to join Anzhi Makhachkala, a Russian professional club managed by Hiddink. He plans to stay with the Russian club as an assistant coach until May.

The former star player coached Korea to a bronze medal during the London Olympics last year, the first Olympic medal in football for Korea.

Since then, there has been speculation that he would take over for national team coach Choi Kang-hee, who said he would step down after Korea’s ongoing 2014 World Cup qualifying campaign ends in June.

“As the training [as a coach] in Russia is to finish in May, just before Korea is to have a new national team manager, I had inner conflict whether I should do this or not,” Hong told a media meeting at Incheon International Airport. “But I did not want to lose out on a good opportunity due to a misunderstanding.”

The former captain of the Taegeuk Warriors, who advanced to the semifinals of the 2002 World Cup under Hiddink, Hong announced last month that he was given an offer to work as an assistant to Hiddink at Anzhi for several months and accepted it.

Some speculate that the move was calculated to smooth his transition from Olympic football coach to national team coach.

“I feel burdened that this [speculation] grows at a time when the national team has to play important matches,” Hong said. “I think this is not courteous either to coach Choi Kang-hee.”

Hong, however, did not deny the possibility when asked whether he would accept the job if offered.

“I have not thought as far ahead as that. For now it is important to successfully finish this training,” he said.

He said that his assistant coach position with Anzhi is not an official spot, but that he is allowed to attend all the training of the players and the coaching staff meetings.

Hong will join Hiddink’s Anzhi Makhachkala in its ongoing overseas training in the UAE. It is the first time Hong has been offered a coaching opportunity with a private football club. Hong has built his coaching career entirely with Korean national teams.

“Thanks to the help of coach Hiddink, I have an opportunity to join as a coaching staff of Russian Premier League club Anzhi and take a look at the inside of the club,” he said. “I will return after learning a lot of things.”