Spotlight on Cruise during visit to promote ‘Jack Reacher’

Spotlight on Cruise during visit to promote ‘Jack Reacher’ 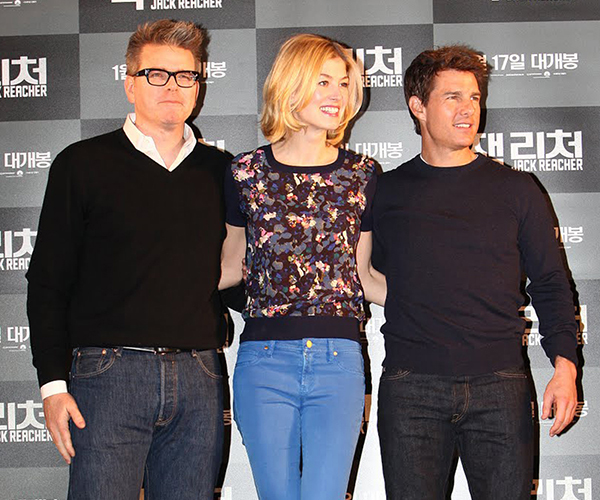 
“Jack Reacher” director Christopher McQuarrie and actors Tom Cruise and Rosamund Pike visited Seoul and Busan yesterday to promote the opening next Thursday of the Hollywood action thriller in Korea.

“Happy new year. I feel great to be in this beautiful city. I want to give thanks to my fans who greeted me last night at the airport,” said Cruise during a press conference held at the Conrad Hotel in Yeouido, western Seoul.

Despite arriving at midnight, Cruise received a hero’s welcome from a large number of female fans after his plane touched down at Incheon International Airport. Cruise, who’s in Korea for the sixth time, happily posed for pictures and signed autographs.

As an adaptation of Child Lee’s celebrated novel “One Shot,” “Jack Reacher” tells the story of a former military police officer’s unorthodox investigation into a series of serial murders. The actor plays protagonist Jack Reacher, a hard-as-nails drifter with exceptional criminal investigation skills. 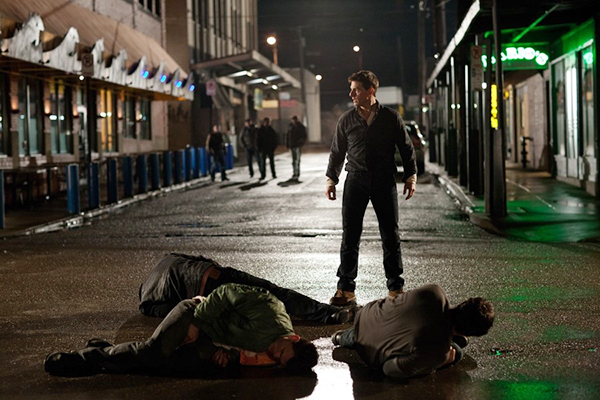 “Jack Reacher” centers around a former military police officer who gets involved in a serial murder case. Provided by CJ E&M

“Jack Reacher is able to see things that others can’t. He is taking care of situations which others are not able to,” said the 50-year-old actor.

“He is someone who has chosen not to engage in a normal way. He is kind of an analog character in the digital age because he gets drawn into the story. From the beginning, he is trying to leave. But he has an incredible skill set - not only physical but intellectual - and his own sense of what is right and wrong, being able to confront evil.”

The action-packed film might pose a physical challenge to Cruise, but he said the most difficult part is to capture the human side of the fictional hero, saying, “Expressing the wit and humor in Lee Child’s character was challenging.”

As for action scenes packed with hand-wringing car chases, he said, “I had a lot of fun while shooting the scenes. We were not using a bunch of visual effects, but we did drive and spent a lot of time on it.”

Emphasizing efforts to make the chase scenes as realistic as possible, Cruise said, “We didn’t use a stunt car, it is a real car.”

“I worked with Tom in the previous work [‘Valkyrie’ in 2008], and I found he carries himself well under the intense pressure,” said McQuarrie.

The Busan Metropolitan Government presented the Hollywood hotshot with honorary citizenship yesterday while he was in town.

The certificate verifying Cruise’s place in the seaside city was to be presented by Mayor Hur Nam-sik. Along with Cruise, lead actress Pike and the director McQuarrie received the honor of calling Busan home.

“The visit of a top star and director will contribute to promoting Busan’s important status in Asia for cinema,” said an official of the municipal government.

“The city decided to award the honorary citizenship to Cruise in recognition of his contribution to the industry.”

When asked about the news, the actor said, “It’s a great honor and I am very excited and looking forward to receiving it.”

Busan has been the home to Korea’s - and Asia’s - largest annual film festival and is becoming an increasingly popular production site for both domestic and international films.

The visit by McQuarrie, Pike and Cruise marked the first time a red carpet event has been held there for a foreign movie outside of the festival period.

The city is not alone in expressing endorsement of the iconic star. When asked which celebrity he’d most like to see perform “Gangnam Style,” Korean rapper Psy has repeatedly named Cruise.

When a reporter urged him to do the horse-riding dance, Cruise demurred, but added that he “really enjoys listening to the song.”

Having been released in Britain and the United States at the end of last year, the film has grossed more than $4.3 million at the box office worldwide and was No. 5 on New Year’s Day.