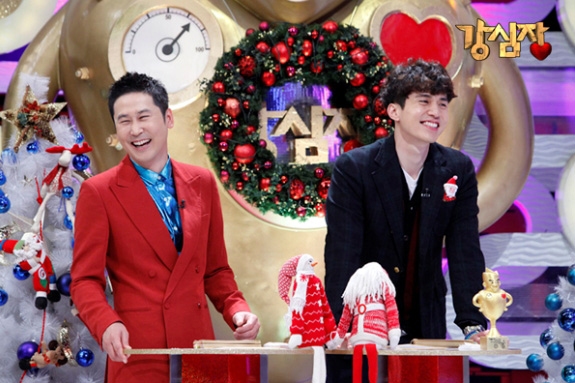 The popular SBS talk show “Mighty Heart” will be taken off air soon.

A network spokesperson said that hosts Shin Dong-yup and Lee Dong-wook have decided to step off the show. “They’ve got a show to take over the time slot, so it will be hard to persuade the higher-ups to keep the show,” the spokesperson said.

Lee’s agency also confirmed the actor’s resignation. “Lee Dong-wook will film his last episode on Jan. 17,” said a spokesperson from King Kong Entertainment. “There was a reshuffling on the show, and because Lee wanted to concentrate on acting, it seemed like the right time to leave.”

The talk show debuted in 2009 with hosts Kang Ho-dong and Lee Seung-gi with a star-studded lineup of celebrities trying to outdo one another with tall tales.

When Kang went into tentative retirement, Lee hosted the show alone before giving up his spot to the current hosts.

In its heyday, the show pulled in double digit viewers’ ratings.