Flour hikes may spill over to bread and noodles

Flour hikes may spill over to bread and noodles 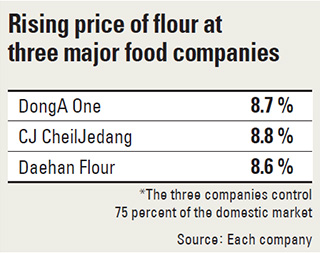 After a number of food companies raised their flour prices, confectionery, noodles and other foodstuffs look like they may become more expensive, sparking concern about consumer price inflation.

As they control a combined 75 percent of the domestic whole flour market, increases in the prices of bread, instant noodles and sweets seem to be inevitable, industry sources say.

The flour price hike is a sensitive issue as it adds a further burden to cash-strapped consumers and spells bad news for small restaurants and mom-and-pop bakeries as they will see their overhead go up.

Food manufacturers have been sharply raising their prices in the wake of the Dec. 19 presidential election. Previously, they faced pressure to keep the prices low under the incumbent Lee Myung-bak administration’s goal of stabilizing inflation.

The food companies claim the rise is long overdue given the rising prices of raw materials.

“We were inevitably forced to raise our prices as raw materials have surged more than 40 percent. However, we limited the rate to a single-digit hike out of respect for consumer price stability,” said a spokesman at Daehan Flour.

Confectionery suppliers, which simultaneously raised their prices last year, are reading consumer sentiment before making additional price adjustments, as this could spark strong criticism from consumers.

The confectionery suppliers are reportedly discussing when and by how much they should increase their prices.

Ramen suppliers such as Samyang Food, Paldo and Ottogi are also directly affected by the price of flour.

Samyang Food and Paldo increased the prices of their ramen products last year, while Nongshim and Ottogi kept theirs unchanged.

“We do not immediately jack up the consumer prices of our ramen products just because the price of flour has increased. Although it can be one of the factors contributing to the rise of the price, we also care about the burden on consumers,” said a spokesman at Nongshim.