Pension service to pay for welfare

Pension service to pay for welfare 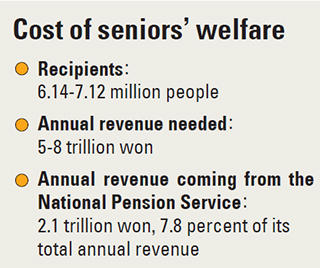 President-elect Park Geun-hye will double welfare payments for poor elderly people and expand them to include affluent seniors, which will cost a total of 14 trillion won ($13.2 billion) over the next four years.

A good chunk of the money will come from the National Pension Service, Korea’s version of the social security system in the United States, a member of the president-elect’s transition team said yesterday.

National Pension Service revenues are not supposed to be used for welfare.

Currently, senior citizens over 65 years of age in the lower 66 percentile income bracket, around four million people, receive 97,100 won monthly in a basic government subsidy for senior citizens. The amount has been criticized as being insufficient for a long time. 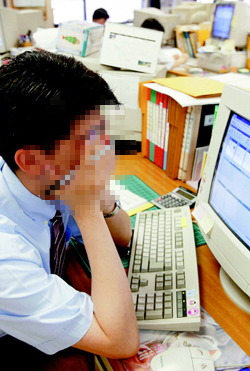 Ahead of her election last month, Park pledged to increase the old-age subsidy to 200,000 won for all seniors.

The transition team modified the pledge, saying that subsidies will be based on income, with the poorest seniors receiving a full 200,000 won while more affluent seniors will receive no less than 97,100 won.

The basic old-age subsidy is paid by government funds.

In order to extend the basic old-age subsidy over the next four years, starting from next year, the Saenuri Party estimates that it will need to procure 14.7 trillion won. It plans to take some 5 trillion to 8 trillion won from the National Pension Service, and the rest will be drawn from national and local government budgets. This will apply to 6.39 million seniors next year, and by 2017, some 7.12 million seniors.

For the next four years, some 2 trillion won per year will be taken from the National Pension Service. This will amount to 7.8 percent of the service’s annual revenues of around 27 trillion won.

The National Pension Service has 384 trillion won in reserves.

“The money will not be taken from the reserves of the National Pension Service but will be procured from its revenues collected starting from next year,” said a member of transition team from the ruling Saenuri Party. “The existing reserves will not be touched so pensions for workers to receive when they turn 61 will not decrease.”

Park pledged during presidential debates to boost welfare for seniors by replacing the current basic senior subsidy system with a basic pension system and “unify” the two systems.

But since Korea is an aging society that will have a fifth of its population over 65 by 2026, the number of workers paying into the National Pension Service will shrink while the number of seniors increases.

While some officials say it’s “ideal” to combine the two systems, many express skepticism and anticipate a backlash from a younger generation that fears their old age pensions will be squandered.

The National Pension Service’s coffers are expected to be depleted by 2060, according to analysts.

“The National Pension Service is a fund that has a separate owner,” said Park Sun-il, director of the Korean Social Policy Institute. “The basic old-age subsidy and national pensions are systems with different pockets, so to speak. If you take that money away, the younger generations’ retaliation will be great.”

“The working insurers paying monthly fees to the National Pension Service are its owners,” said a government official who asked to remain anonymous. “If this money is poured into basic old-age subsidies, this can raise the issue of an infringement of property rights.”

“I don’t know why they are using the insurance money that I paid without my consent,” said Kim Do-hoon, a 32-year-old office worker. “If they use the funds from the overly generous National Pension Service and something happens later on, who will take responsibility?”