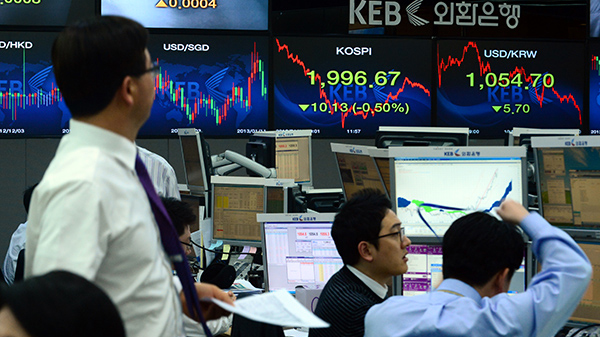 The Korean central bank lowered its economic outlook for this year to below 3 percent as fear persists over the flagging economic recovery of the global market, particularly Europe.

The Bank of Korea yesterday announced that it has revised its outlook for 2013 to 2.8 percent.

Only three months ago, in October, the central bank lowered its projection from 3.8 percent to 3.2 percent.

The revised forecast was conservative compared to the Ministry of Strategy and Finance’s outlook of 3 percent as well as the 3.1 percent growth predicted by the Organization for Economic Cooperation and Development and the International Monetary Fund’s 3.6 percent.

Until early last year the Finance Ministry and the BOK were confident that the global economy, depressed by the euro zone fiscal crisis, would recover in the second half of 2012.

However, by mid-2012 it was evident that economic doldrums would continue as a result of the unresolved euro zone crisis as well as the fiscal cliff drama in the U.S. The Finance Ministry finally gave in last month and dramatically changed its outlook from 4 percent to 3 percent.

China, which is Korea’s largest trade partner, posted 7.4 percent growth in the third quarter, which is the lowest expansion the country has seen in more than three years.

The U.S. economy grew 3.1 percent in the third quarter but there is speculation that in the first three months of this year U.S. growth would slow to 1 percent. Europe saw its economy shrink 0.1 percent between July and September.

As a result Korea’s economy was almost flat in the third quarter. On-year the economy grew 1.5 percent but when compared to the second quarter it only gained 0.1 percent, which was the lowest quarterly growth since the first three months of 2009.

“Previously we expected the fourth quarter to grow 0.8 percent compared to the third quarter but it is likely that the last three months expanded 0.4 percentage point lower than our expectations,” said Kim Choong-soo, Bank of Korea governor.

The central bank estimated last year’s growth to be 2 percent, the lowest annual growth since 2009.

However, the central bank was confident that the economy will turn around in the second half of this year. In fact, Kim said during a press conference that although the estimate for this year was lowered, the economy was largely on the track of recovery.

He said companies hoarding their cash and refraining from large investments was a critical reason why the economy failed to grow as expected.

While the BOK expects the economy in the first half to shrink 1.9 percent on-year, in the second half the economy will rise 3.5 percent, it said.

Once it is back on track, the BOK projected the economy will grow 3.8 percent in 2014.

“Exports are expected to show faster growth than last year, as the world economy gradually recovers and the volume of trade increases,” the central bank said in a statement.

It added that private consumption will improve modestly on more positive consumer sentiment and increases in purchasing power.

The central bank also expects facilities investment to pick up.

Exports and imports are expected to grow 5.5 percent and 4 percent on-year this year while consumption will grow 2.8 percent and investment 2.7 percent.

For next year the central bank projected the economy will expand 3.8 percent.

Earlier in the day, the central bank’s monetary policy committee decided to freeze the key interest rate at 2.75 percent for the third consecutive month after it concluded that the economy has not worsened since the last quarter of last year.

Some market experts were betting that the central bank would lower the borrowing rate to assist President-elect Park Geun-hye by stimulating the economy.

The central bank governor, however, stressed that the priority of the BOK is to stabilize inflation.

The bank said this year consumer prices would grow 2.5 percent while next year it will target 2.8 percent growth.