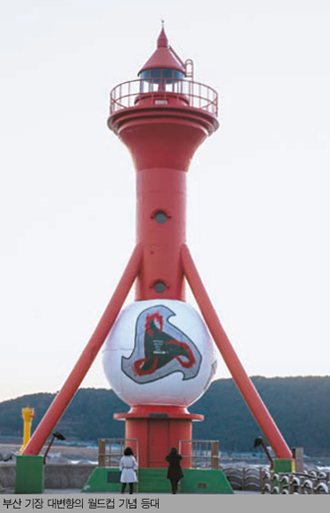 The sea is restless, causing changes in the weather more than 12 times a day. At night, fishermen stay alert, nothing to lean on. They hear only the sound of waves hitting their boats, see nothing except for a faint ray of light on which fishermen pin their hopes. For they know that somewhere beyond are their homes and families.

Lighthouses are their consolation and hope.

As the new year brings with it the promise of smooth sailing ahead, the JoongAng Ilbo takes a look at several of Korea’s lighthouse hot spots.

Busan declared itself the “City of Lighthouses” in 2009 to cement its reputation as the country’s best seaside tourist destination. Since then, many unconventional lighthouses have sprouted up in the area, particularly around Daebyeon Port in Gijang County.

Five lesser-known lighthouses stand along the 4-kilometer (2.5-mile) coastline at Daebyeon Port. The oldest of them is the World Cup Memorial Lighthouse, built in 2003 to commemorate the Korean national football team reaching the semifinals of the 2002 Korea-Japan World Cup. An enlarged monument of Fevernova, the official FIFA ball used during the 2002 World Cup, is installed in the lower part of the lighthouse.

After the World Cup Memorial Lighthouse immediately drew attention from the media, several other interesting lighthouses were built, such as Jangseung Lighthouse, which is shaped after jangseung, the country’s traditional totem pole.

Jeotbyeong Lighthouse was established to symbolize Busan’s wish for more babies. The city had the lowest birth rate among the country’s major cities and provinces in 2009. Jeotbyeong means baby bottle.

Stair Lighthouse, where the visitors can walk up a stairway to the top of the lighthouse, has many locks fastened to the handrails left by couples as tokens of their love.

Chilam Port, which is a 20-minute drive from Daebyeon Port, is home to Baseball Lighthouse.

The lighthouse, shaped like baseball, glove and bat, reflects the popularity of the sport in the city, which roots for the Lotte Giants in the Korea Baseball Organization league.

Opposite Baseball Lighthouse is Seagull Lighthouse, shaped like the city’s representative bird.

These Busan-area lighthouses not only guide vessels to safe harbor, they also bring in tourism revenue.

“Thanks to the lighthouses we have more of visitors coming,” says Han Bo-yong, 68, of the fishing village at Chilam Port. “It has become easier to navigate the courses of the ships, as well.”

Ganjeolgot Lighthouse in Ulsan is one of the most popular venues for seeing the first sunrise of the year. There, people can see the year’s first light earlier than any other place on the Korean Peninsula. The first sunrise of 2013 occurred at 7:31:29 a.m. at Ganjeolgot. Got in its name means cape.

Ganjeolgot is also famous for a five-meter-tall (16.4 feet) post box, named Somang (Hope) Uchetong (postbox). Postcards with wishes placed in the postbox at the lighthouse will be delivered by regional office workers.

Some of the wishes written on the postcards are broadcast weekly by the Ulsan branch of MBC. One of the stories introduced recently was from a would-be mother who sent a New Year’s greeting to her soon-to-be-born child.

Ganjeolgot Lighthouse initially stood on the hill behind where the postbox is now. The lighthouse was built by the Japanese in the 1920s, but it was destroyed by the U.S. bombers during World War II.

After rebuilding and several refurbishment projects, the current lighthouse bears little resemblance to the original.

The map of the Korean Peninsula looks like a crouching tiger, with Homigot in Pohang at the tail. The sunrise at Homigot occurs only 59 seconds later than at Ganjeolgot.

Like Ganjeolgot Lighthouse, Homigot was built by the Japanese. Many Japanese ships ran aground in the sea off Homigot and Japan built the lighthouse in 1908. While it may be an unwelcome relic of Japanese colonialism, it is architecturally significant. Though it did not use any steel bars in construction, the 26-meter red brick structure has stood for more than 100 years.

Another noteworthy lighthouse is located at Mukho Port in the Gangwon city of Donghae. Residents of the village on the side of a mountain depend on fishing for their livelihoods.

The Mukho Lighthouse lit up for the first time in 1963. From the beginning, it was more than just a lighthouse; it was a way of life for villagers.

The regional government hired local residents during construction to carry building materials to the construction site. In return, they received vouchers for flour.

“The lighthouse fed the whole village,” said Son Man-taek, 74, who runs a small grocery store in front of the lighthouse.

After the lighthouse was finished, the village continued to depend on it. At the time, squid was very expensive and popular, and a night of fishing on a small vessel one night could bring in more income than a monthly salary of a government official.

The structure also provided light for the coal ships gathered at Mukho Port. It was the time when the coal industry was at its peak in the region.

But as the industry waned and the squid catch declined, residents began leaving the island. In their absence, some artists began to cover the fences outside vacant houses with paintings that depicted the lifestyle of the fishermen in the village just a few decades earlier.

There are more than a dozen wall paintings in the village and an organization called Donghae Culture Center (mukho.org, 033-531-3298) provides a guided tour for visitors. You can get a glimpse of the wall paintings at its Web site, but descriptions are available only in Korean.

There are some famous lighthouses sightseeing in the Yellow Sea and South Sea as well.

1. Palmi Island Lighthouse in Incheon is Korea’s first modern style lighthouse. Japan built the lighthouse when it was preparing for the Russo-Japanese War (1904-5). It lit up for the first time on June 1, 1903, the year that lighthouse construction started in Korea. Korea marked the 100th anniversary of the lighthouse in 2003.

Palmi Island Lighthouse also helped Allied Forces in the famous 1950 Incheon Landing during the 1950-53 Korean War. The obsolete original lighthouse was replaced when the city built a new adjacent one in 2003. There is a cruise to the lighthouse from Incheon port three times a day. It takes one hour.

The Yeosu Regional Maritime Affairs and Port Office operate trips to the lighthouse as part of a two-day visit program. There are no trips on Monday.

Each trip has a capacity of eight people. Reservations should be made at least two weeks in advance by calling 061-666-0906.

Deungdaeseom is a small island off Somaemul Island where there are more than 40 lighthouses, including a white round lighthouse that stands 16 meters high above the island surrounded by cliffs.

Somaemul Island is connected to Deungdaeseom by a 70-meter pebble trail that is accessible only twice a day at low tide. It takes about 80 minutes from the Tongyeong Passenger Terminal.