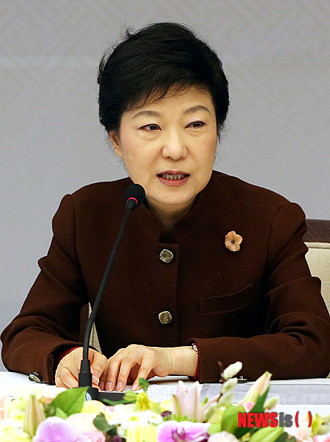 The transition team held a press conference to announce the partial restructuring of the government. It will basically restore the government’s structure to what it was five years ago before a reorganization by President Lee Myung-bak.

“With this new ministry, we want to create the foundation for a creative economy through creative science,” he said. “It will strengthen the government’s abilities to develop new growth engines and create jobs.” 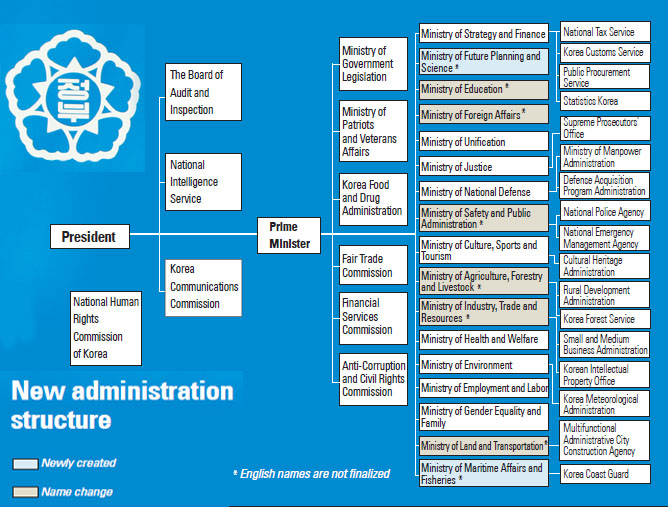 The new ministry is expected to be the crown jewel of the incoming administration and it will absorb functions of various government ministries and offices.

Kim said the new ministry will oversee policies on information, communications and technology. A vice minister will be appointed to oversee the three areas, Kim said.

Speculation was high that a separate ministry would be created to deal with information, communications and technology but Park decided to combine them in the new ministry and appoint a vice minister as well.

The ministry will oversee a wide range of policies previously handled by the Korea Communications Commission and the three ministries: Public Administration and Security; Knowledge Economy; and Education, Science and Technology. While the commission will be kept, its duties will be curtailed.

The new ministry will also absorb the functions of the Nuclear Safety and Security Commission.

The transition team said English names of the ministries were not yet finalized. The Ministry of Maritime Affairs and Fisheries will be revived, Kim said, to “proactively counter the rapidly changing maritime order.”

The maritime ministry was shut down five years ago when President Lee Myung-bak restructured the government.

Park will appoint a deputy prime minister to focus on economic affairs.

“It is to tackle economic crises at home and abroad and to lead economic revival of the country,” Kim said.

Yoo Min-bong, head of the state affairs planning subcommittee of the transition team, later explained that the minister of strategy and finance will double in that role as the deputy economic prime minister.

The decision to add trade affairs to the Foreign Ministry was made during the Kim Dae-jung administration, and trade officials will go back to their original places after 15 years.

As already promised, the role of the Small and Medium Business Administration will be strengthened, Kim said.

The Ministry of Public Administration and Security will change its name to the Ministry of Security and Public Administration to demonstrate Park’s determination to make public security her top priority. The National Police Agency, which is under the ministry, will focus more on maintaining public order by countering crimes more responsibly, Kim said.

The Korea Food and Drug Administration will be elevated to a ministerial-level office under the oversight of the prime minister to manage the nation’s food safety, Kim said. As of now, the administration is under the Ministry of Health and Welfare.

Park decided to shut down the office of the minister without portfolio. The Kim Dae-jung administration dismantled the office in 1998, but Lee revived it in 2008.

The minister has been in charge of special political missions, but criticism continued about the role.

“Through her long legislative career, President-elect Park has listened to various opinions of the people and civil servants,” Kim said. “This reorganization of the government is an expression of her philosophy focused on public safety and economic revival to open the era of the people’s happiness.”

Ruling Saenuri Party officials have said a revision bill on the Government Organization Act should be approved during the January session, taking into account the schedule for Park to create her cabinet.

The press conference to announce the government restructuring was originally scheduled for 4 p.m. yesterday, but was delayed to 4:25 p.m. and then again to 5 p.m. due to last-minute fine-tuning, Kim said.

Over the past two decades, presidents, at the beginnings of their terms, restructure the government organization to better implement their visions.

While the Roh Moo-hyun administration made minimal changes, focusing on a supposed “upgrade of software rather than hardware,” a massive overhaul took place before the Lee Myung-bak administration was launched. The plan to build “stronger yet smaller government” met strong resistance from the opposition parties.

Five years ago, the opposition party disagreed with Lee’s plan to scrap the Ministry of Unification and the Ministry of Gender Equality. While the ministries survived, the bill to implement Lee’s other government restructuring plans was only approved three days before his inauguration on Feb. 25, 2008.