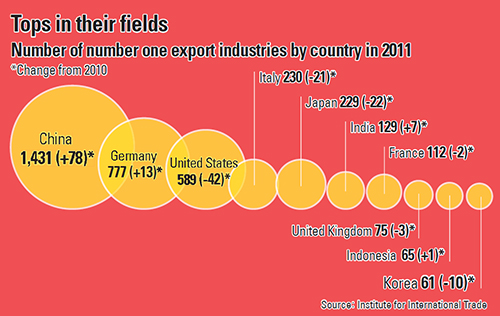 Ironically, the core of the set, the 110-inch panel, was produced by Chinese manufacturer BOE.

“It is possible for Samsung to manufacture panels, but it is hard to produce all the parts that we need at any given time,” said Kim Hyun-suk, executive vice president of Samsung’s TV division.

That’s one way of looking at it. The other way is that China is starting to horn in on Korea’s dominance in certain areas.

Gone are the days when China was content making cheap products and building up market share in them. And as it moves up the supply chain ladder, it’s starting to dislodge Korea from its various perches.

According to the Korea International Trade Association, Korea lost its position as the world’s top manufacturer of 26 different items to China in 2011.

China is threatening to dislodge Korea in 13 more categories. Each year, the number of items that China overcomes Korea to become the No. 1 exporter is increasing, from two in 2009 to seven in 2010 and 12 in 2011.

The number of industries that Korea remained the number one exporter was 61 last year, down 10 from the year before.

More companies are turning their back on Korean companies and purchasing parts from newly rising Chinese companies.

Chinese smartphone maker Huawei is now using application processors, the brains of mobile devices, that it makes itself.

Until recently, Samsung Electronics was the only smartphone maker in the world that produced its own application processors. 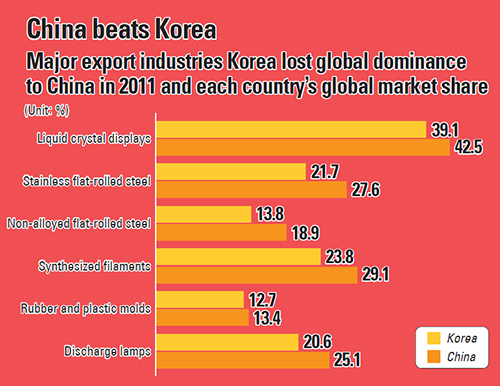 China has chosen seven strategic industries to dominate, including high-tech parts manufacturing and new generation information technology. It plans for those seven industries to take account for 8 percent of its total gross domestic product within three years from the current 2 percent.

“As China’s major industrial focus collides with Korea’s, we will see an irreversible aftermath if we neglect putting more focus into fostering industry for growth,” said research fellow Choi Nam-suk at the Korea Economic Research Institute.

A local steering wheel maker who moved to Beijing in the mid-1990s has started using parts produced in China since 2005, abandoning parts from Korea. Last year, 80 percent of the parts used by the company were made in China.

“It is hard not to use China-made parts as the quality is about the same [as Korean-made],” said an official at the company. Obviously the Chinese parts are cheaper.

Another local automobile wheel maker based in Gimpo, Gyeonggi, went out of business last year after a surge in Chinese-made parts flooded the market.

“Chinese parts suppliers have caught up with Korea’s technology in design and quality and they have been squeezing local companies out of the global market,” said an official at the company.

China has grown to become the world’s top parts exporters pushing Korea, Japan and the U.S. behind in the past decade. China’s share in the global market for parts manufacturing jumped to 11 percent in 2010 from 4 percent in 2001. 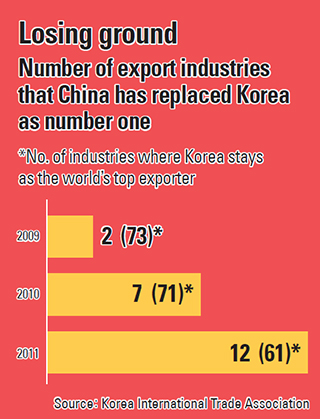 Other statistics support the trend. While 40 percent of Korean companies working in China used intermediate materials from Korea in 2006, only 20 percent did in 2011.

“China’s parts makers have competitiveness in prices because they can have economies of scale with a gigantic domestic market,” said research fellow Bok Deuk-kyu at the Samsung Economic Research Institute. “Many local companies will be at risk of holding onto their businesses as they will continue losing buyers.”

Only four years after China entered the business of polysilicon, a core element in manufacturing semiconductors and solar batteries, one-third of the global supply is produced by Chinese companies.

With its economies of scale, production costs of Chinese products dropped to $20 per kilogram ($9 per pound) from $70 per kilogram.

“As Chinese companies are oversupplying the market, Korean companies can’t even dare to enter the polysilicon market,” said Lee Cheol-haeng, head of corporate policy at the Federation of Korean Industries

The strong Korean won made it even more difficult for local parts makers to compete with Chinese companies.

“As the won has been strong recently, the rate of profit to sales for local parts suppliers dropped to the 5 percent range from the previous 7 percent range,” said analyst Jung Geun-hye of Woori Investment and Securities.

“It won’t be easy for the companies stay strong if won gets even stronger.”

“We need to have some special action taken, such as inviting global companies to put their research and development centers in Korea so that the country can be the headquarter of global parts,” said Economics professor Cho Dong-geun at Myongji University.