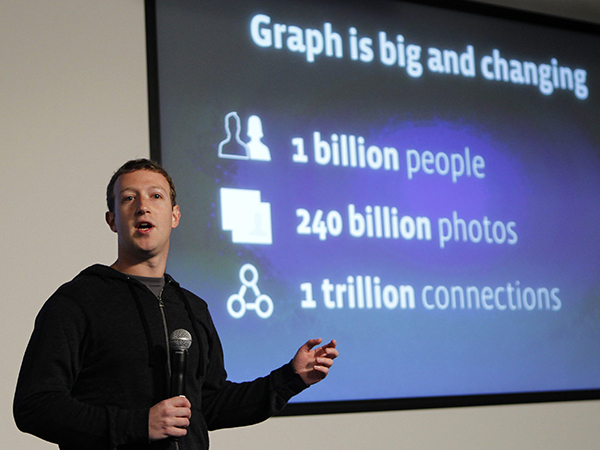 
Facebook on Tuesday unveiled a tool for searching information posted to its social network of more than one billion users, creating an alternative to services now available on Google, LinkedIn and Yelp.

When fully rolled out, the tool will give many Web users an incentive to spend less time on Google, Yelp’s reviews and LinkedIn’s professional site. While Zuckerberg said the new feature could be a “business” in the future, he didn’t outline how it will make money soon. That failed to satisfy investors anticipating steps to generate income quickly, according to Susan Etlinger, an analyst at Altimeter Group.

“There’s a lot of pressure for Facebook to increase its monetization efforts,” Etlinger said. “It still works like a private company, it moves slowly.”

Facebook fell 2.7 percent to $30.10 at the close in New York on Tuesday. Yelp, a restaurant and business-review Web site, fell 6.2 percent to $20.61. LinkedIn and Monster Worldwide recovered from earlier declines caused by speculation that Facebook’s job-search capabilities might pose a threat to similar features on their own sites.

“Graph Search is designed to take a precise query and return to you the answer, not links to other places,” Zuckerberg said.

Facebook’s new service, which is being rolled out in test mode to a limited number of members, encroaches on Google’s turf as a source of information and a destination where advertisers can reach users.

“Which is more valuable: Finding a sushi restaurant in New York City or finding one that my friends like?” asked Michael Gartenberg, an analyst at Gartner. “This continues to pit Facebook against Google.”

If Facebook introduces more robust advertising based on search results, it could grab 5 percent of the U.S. search advertising market, which reached about $15 billion in 2012, within a year, according to Karsten Weide, an analyst at IDC.

Facebook also said it has a partnership with Microsoft’s Bing search engine, which will deliver additional results from the Web when Graph Search doesn’t deliver clear answers to queries.

Facebook hasn’t worked out a similar deal with Google. Zuckerberg said he would “love to work with Google,” but that he couldn’t come to an agreement with the Web-search provider over gathering and using people’s data.

While Graph Search makes finding information on Facebook more efficient, results will be based on information that’s already available to users based on their preferences. Privacy was built “deeply” into the service, Zuckerberg said.

Google has been moving onto Facebook’s turf with its own social-networking service, Google+, which was unveiled in 2011, according to Danny Sullivan, founder of the Search Engine Land technology blog.

“It will cause Google to do something about whether or not they need to look further at mimicking these kinds of searches that they currently cannot do,” Sullivan said. “They actually get back into Google’s face a little bit. Here, Facebook has sat and watched Google try to come into their space, no holds barred.”

Graph Search is also aimed at promoting the discovery of new friends on the network, Zuckerberg said. Unlike Web search, which relies on keywords, Graph Search lets users combine phrases, such as “My friends in New York who like Jay-Z” to find out information that’s been shared on the social network.

The search box, located on the top-left part of the home page, lets users enter a query and then suggests potential searches as members type. The results can be tailored to more specific parameters, such as time frame, location or other information that might be in profiles. For example, users on vacation in Ireland could look for pubs that others in Facebook have “liked.”

Facebook plans to expand Graph Search to include information from user postings, as well as other online services connected to the social network. The service will also be extended to mobile devices and other languages. For now, the search is available only in English to those signing up for beta testing.

The new service will include basic advertising tools that carry over from the previous, simplified search feature that lets companies and individuals highlight a result below the search box.

“This is just some really neat stuff, this is one of the coolest things we’ve done in a while,” Zuckerberg said. “Graph Search is a completely new way for people to get information on Facebook.” Bloomberg