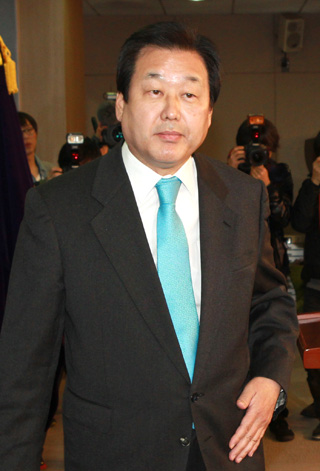 The delegation, led by Kim, is the first group of envoys to be sent by the president-elect since her presidential victory on Dec. 19.

“The delegation will confirm the friendly ties between Korea and China,” Park’s spokesman Park Sun-kyoo told reporters at a news briefing yesterday.

“It’s most likely that they will wish for Korea’s relations with its largest economic partner China to develop further amid the rapidly changing environment in Northeast Asia. Security issues will also be on the agenda.”

According to the spokesman, the delegation, led by Kim, former head of the Saenuri Party’s election strategy office, will be in Beijing from Jan. 22-24.

Representatives Shim Yoon-joe and Cho Won-jin as well as Han Seok-hee, professor of international relations at Yonsei University, are also part of the delegation. They will meet with Xi and other officials in the leadership.

“The delegation is in response to a request made by China last week when Zhang Zhijun, Chinese Vice Foreign Minister, delivered a message from Xi to Park as a special envoy,” the spokesman said, adding that it hasn’t been confirmed whether the delegation will deliver a personal letter from Park to Xi.

Cooperation with China is seen as critical, particularly at a time when South Korea, along with the United States, is pushing for action by the United Nations Security Council (UNSC) against North Korea’s long-range rocket launch last month. China, North’s closest ally, is a veto-wielding permanent member of the UNSC and it is reportedly reluctant to impose tougher sanctions on Pyongyang.

Also, insiders note that sending Kim, a former four-time lawmaker and a key official, to China as a special envoy shows the president-elect’s determination to strengthen Korea-China ties in all areas throughout her five years of presidency. During the outgoing Lee Myung-bak administration, Seoul-Beijing ties were focused mainly on economic relations rather than political, whereas much effort and progress was made in boosting the Seoul-Washington alliance. When President Lee was elected in 2007, he sent special envoys to the U.S., China, Japan and Russia, the so-called four powers, all at the same time. Park was Lee’s envoy to China at the time.

Kim, from Busan, is a former four-time lawmaker who served as the Saenuri Party’s floor leader from 2010-11. Kim oversaw Park’s campaign during the then-Grand National Party presidential primary in 2007 when Park lost to Lee.

But their relationship soured when Kim challenged her decisions when he disagreed with her decision to support the relocation of government offices to Sejong City in 2009.

The two got back together in April, last year, when the general election was held. Though he was denied from getting a nomination, he stayed with the party and supported other candidates. Kim joined Park’s campaign at the end of September.

“China sent a diplomat as a special envoy to Seoul [last week] while from Seoul, President-elect Park is sending a politician,” said Kim Han-kwon, a China expert at the Asan Institute for Policy Studies. “This shows that there is a political motivation.”

Kim added that “When it comes to Korea-China relations, Seoul should strategically and continuously discuss with Beijing on the North Korean nuclear issue.”

“Korea’s relations with China have been largely influenced by Washington-Beijing and Seoul-Washington relations and the [incumbent] administration had much focused its ties on strengthening the Korea-U.S. alliance,” Kim said.

“There’s hope now that Korea will be able to establish a new type of relations with China seeing from how Park Geun-hye is taking a new position on China.”

The transition team, however, denied any significance on the visit.

“The request was made from the Chinese side and the decision was made after an agreement from both sides and the process was completed.”