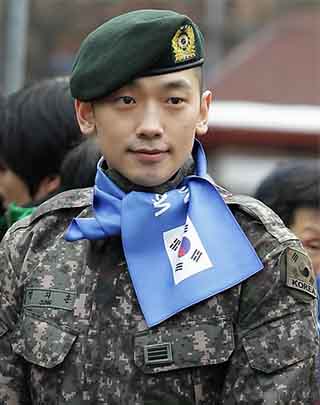 Rain attended a patriotic show of military force on Saturday (pictured above), in what many consider a bid to shore up his image tarnished by secret rendezvous with his girlfriend Kim Tae-hee while on military duty.

More than 1,000 reporters and fans showed up to see Rain, whose real name is Jung Ji-hoon, accompany fellow soldiers on a five-kilometer (3.1-mile) hike from Gyeongbok High School to Samcheong Park in Jongno District, central Seoul.

On Jan. 21, 1968, 31 armed North Korean commandos infiltrated the South and approached the hiking course, only hundreds of meters away from the Blue House, before being gunned down or captured by South Korean guards.

It was the first public appearance for Rain since he served a week of probation through Wednesday after public outcry over his secret dates. By Moon Gwang-lip