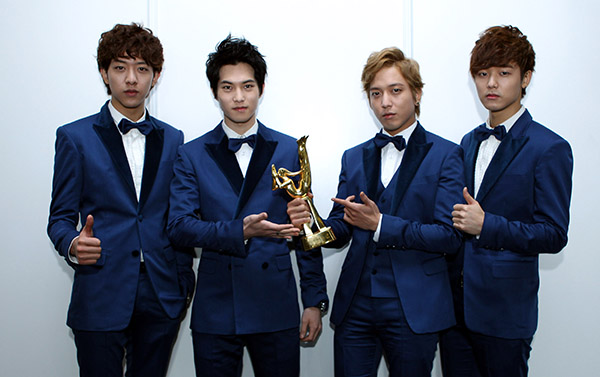 FNC Entertainment announced Monday that CN Blue will make its way around Asia, the Americas, Europe and even Australia on its first world tour.

So far, performances in Taiwan, Singapore, Thailand, Beijing and Shanghai are confirmed, and the agency is going over details with event organizers.

“CN Blue performed in the U.S. in March last year, then in England in September and also made its way to Chile in November to film ‘Music Bank,’?” said the agency, which emphasized that last year the group triumphed all around the globe.

“There’s no other band with the unique qualities and background that CN Blue has, and so the world tour will be the first of its kind,” the agency spokesperson added.

Korean fans will be glad to know that during the anticipated tour, the band will also make a stop in Seoul in May.

Currently, the group is busy promoting the title track “I’m Sorry” taken from its new album “Re: Blue,” which was released last week.