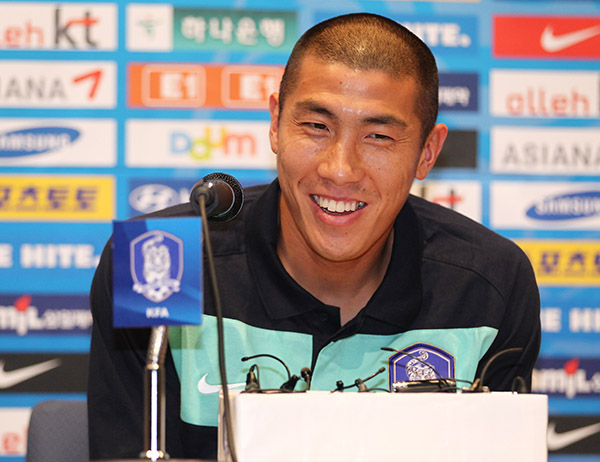 Cha Du-ri is hoping to launch a career in Korea with his father’s former club, the Suwon Bluewings, but the talks are yielding little progress, Ilgan Sports reported.

The German-born defender has skipped winter training with his current club, Fortuna Dusseldorf, sparking rumors his is seeking a new team.

According to sources, Cha, has stayed in Korea and discussed a possible transfer to the Bluewings. Cha, who has played in Europe more than 10 years, has never been with a Korean club.

His father, Cha Bum-kun, a former star player and one of the most influential figures in the Korean football community, managed the Bluewings between 2004 and 2010, winning league titles in 2004 and 2008.

The younger Cha is also close with Jong Tae-se, a North Korean national team striker who recently moved from German club FC Koln to the Bluewings on a three-year deal. Jong, 28, said Cha recommended the Bluewings to him.

Cha is not likely to join Jong at Suwon anytime soon, however, as Suwon is reluctant to pay the asking price for him, the sources said.

“There is no doubt that Cha Du-ri is a star player equipped with ability as well as popularity, but have to take into account his age as he is closing in on the mid-30s,” said a Bluewings official.

Cha, a member of the semifinalist national team during the 2002 Korea-Japan FIFA World Cup, is 32.

The official said the club has offered him a reasonable amount. “It is up to the player’s side whether to accept our offer or not,” the official said.

Club officials, however, said they want to restrain spending this year.

“Even if they are necessary players for us, if their prices are too high, we won’t bring them in,” said Lee Ho-seung, a Bluewings director general.

Cha has spent most of his time overseas with German clubs, except for the two seasons with the Scottish club Celtic through last June.

With Dusseldorf, he appeared in 11 games but did not score. His deal with the club expires in June 2014.

He has played for the Korean national team since 2001 and has scored four goals in 65 appearances, including three World Cups, the first in 2002.